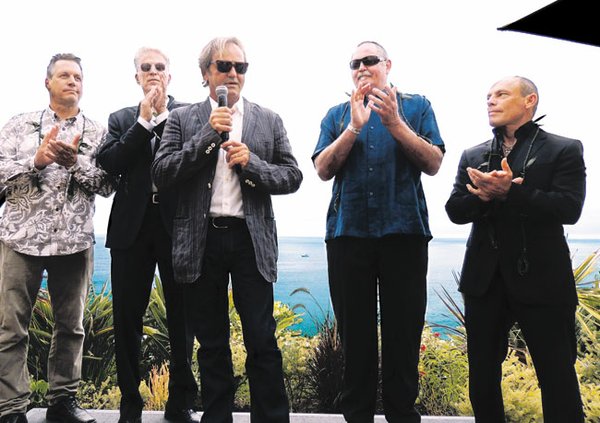 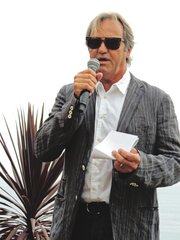 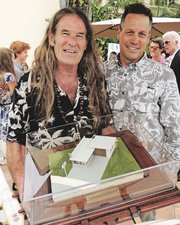 THE PRIZE: Holding up the Special Recognition Award for Hobie Alter is Malcolm Wilson, who crafted the trophies, pictured left, and Jeff Alter, Hobie Alter’s son. 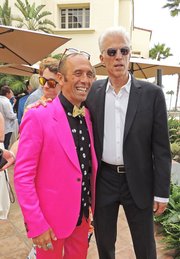 The Waterman’s Ball has been described as the surfwear business’s excuse for a prom, a chance to party at the stunning Ritz Carlton in Laguna Niguel, Calif., and a thank you to the ocean for providing the raw materials for the surfing lifestyle.

At the 25th Waterman’s Ball, held Aug. 9, an estimated $400,000 was raised for ocean-based nonprofits such as Clean Ocean Action, Heal the Bay, Surfrider Foundation and Surfers Against Sewage. The backdrop to the event was the wider 2014 Waterman’s Weekend, when a series of fun events, such as a golfing tournament, helps to raise money for environmental causes. The event was produced by the trade group Surf Industry Manufacturers Association. The weekend’s underwriters included Paul Naude, president of the SIMA Environmental Fund; Joel Cooper, chief executive officer of Lost Enterprises; apparel brands Rusty and Stance; retailer Sun Diego; and the Agenda trade show.

As with past Waterman’s Ball events, great surfers and environmentalists were honored with unique trophies. They are architectural models of specific beach scenes with significance to the honoree.

The “Waterman of the Year” was Tom Carroll, who won the World Championship of Touring in 1983 and 1984 and was the first “goofy foot,” or right-footed surfer, to win the surfing world’s equivalent of the World Series or Tour de France.

The Environmentalist of the Year was Ted Danson. The star of the “CSI: Crime Scene Investigation” TV show founded a nonprofit called American Oceans Campaign, which merged with Oceana, a Washington, D.C.–headquartered environmental nonprofit. He also co-wrote the 2011 book “Oceana: Our Endangered Oceans and What We Can Do to Save Them.”

The Lifetime Achievement Award was given to Rusty Preisendorfer, a legendary board shaper and owner of Rusty Surfboards. His company made the boards used by some of the world’s top surfers, including Mark Occilupo.

The Special Recognition Award went to Hobie Alter, one of the innovators in the surf business and surfing. In 1954 he opened the Hobie Surfboards shop in Dana Point, Calif. It was the first surf shop defined by a retail professionalism. Previous surf shops were guerrilla operations. He also gained note for his Hobie Cat sailboats. Alter passed away in March 2014.

At the Waterman’s Ball, the mood of the event is worn on the sleeves of the guests. Many of the brand chiefs wore outré surf looks with a humorous edge, but Naude, the president of the SIMA Environmental Fund, said the event was of grave importance. “In the early days it was just a party,” he said of the Waterman’s Ball. “It was a get-together for an industry that got together too infrequently. … But work on the environment never ends.”

Fernando Aguerre, president of the International Surfing Association and former chairman and chief executive officer of Reef, wore an electric fuchsia Paul Smith suit to the event, and he agreed that protecting the oceans was an urgent matter. “This is not a battle to keep the ocean clean. It is a war. The polluters never stop,” he said.