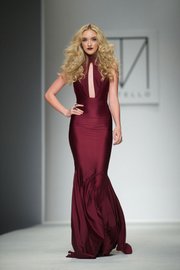 The third season of the MT Costello line, which is designed by “Project Runway” alum Michael Costello and his cousin Stephanie Costello, took a bow on March 10 at the Designers to Watch showcase of Style Fashion Week. The Fall ’14 line found inspiration in Victorian style and vampire-esque Goth looks. The line’s Goth edge gave inspiration for some of the music played during the show such as Marilyn Manson’s provocative version of 1950s R&B tune “I Put A Spell on You”

“It should be creepy and mind blowing. It should make you scared a little,” he said. Count Beyoncé as one of those who was taken by the mix of prim and vamp. She has been wearing the line’s “Black Widow” dress on her current The Mrs. Carter Show World Tour.

The runway show displayed 27 looks of the MT Costello line which used materials such as velvets, satins and lace in dresses with long sleeves and high necks, which were juxtaposed with open backs and hems that are fitted.