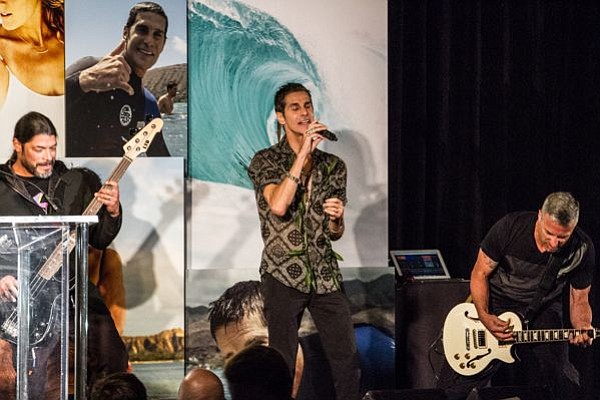 Farrell was named the environmentalist for the year at the Waterman’s Ball. Before he took his trophy, he performed three songs, accompanied by Pyrno for Pyros’ Peter DiStefano on guitar and Metallica’s Robert Trujillo playing bass guitar.

Farrell was recognized for more than 20 years of service and fundraising for The Surfrider Foundation, a beneficiary of the SIMA Environmental Fund, which manages the funds raised by Waterman’s Ball. Farrell also is known as a serious surfer and a performer who often sings about surfing.

The Waterman’s Ball also celebrated the life of Dorian “Doc” Paskowitz. He was posthumously presented the Lifetime Achievement award. He passed away in 2014 at age 93. He is generally considered a pioneer of surfing education. He founded Paskowitz Surf Camp in 1972, the first surf camp which instructs on surfing. He was also seen as one of the guys who wrote the book on the bohemian surfing lifestyle. He gave up a thriving medical practice to take his family of nine children surfing around the world.

Jim Kempton, president of California Surf Museum, and former publisher and editor of Surfer magazine, presented the award to Paskowitz’s daughter Navah and his wife Juliette, said Paskowitz was considered a sage in the surf world. “He would hold court at San Onofre [beach] like a reigning kahuna, but he would speak to people like they were 1.) the most important person in the immediate region, 2.) his best friend, and 3.), as if the passionate point he was always about to make was crucial for you to pass on to the world at large--immediately.”

Gilmore is the second woman to be presented with Waterman of the Year award. In her acceptance speech, the six-time world champion of the Women’s ASP World Tour, said she did not feel that she “challenged” herself as much as previous honorees such as big wave riders Greg Long and Laird Hamilton. Then she told the crowd she was also inspired by Tom Curren, another past Waterman of the Year honoree. Curren is known for being a guy who has the most fun in the water. “That’s what a true waterman is,” Gilmore said.

Waterman’s Ball has raised more than $7 million for various environmental groups in the past 26 years, according to a SIMA statement. The groups range from Surfrider Foundation and Heal the Bay to Santa Barbara Channelkeeper. During the evening, SIMA president Doug Palladini stated this organization’s presidency would be handed to Kelly Gibson, president and chief executive officer of Rip Curl USA.