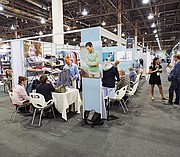 The Skies Are Blue booth at WWDMAGIC 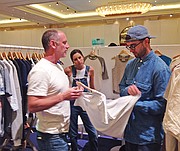 Teresa Gipson, Evelyn Toles and Barbara Hawthorne show off the hats from Scruples Originals, which had a booth at the WWIN show.

Agave at The Tents at Project 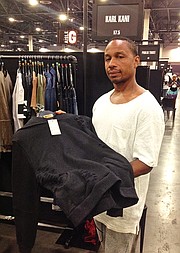 LAS VEGAS—The landscape of the Las Vegas trade shows changed again as the giant UBM Advanstar, owner of the MAGIC Marketplace and Project, re-merchandised the layout of its shows.

For the shows’ Aug. 17–19 run, ENKVegas was renamed Project Women’s, MAGIC Men’s was renamed The Collective, and the Pooltradeshow moved from a lower-level space in the Mandalay Bay Convention Center back to a space adjacent to Project on the main level.

At the Las Vegas Convention Center, Sourcing at MAGIC moved from the South Hall to the North Hall, and MAGIC’s newest partner show, CurveNV@MAGIC, bowed in a dedicated space at the back of the Central Hall next to WWDMAGIC.Playground was in the North Hall, and the convention center’s South Hall featured footwear brands and sourcing resources showing at FN Platform and WSA@MAGIC.

With so much ground to cover, some retailers had to ration the time spent at each show. That was the case for Don Zuidema, co-owner of the West Hollywood, Calif.–based menswear boutique LASC, who said he thought the many trade shows running concurrently in Las Vegas impacted attendance.

“We get a few people and then the booth is full. It’s been like this all day since we opened,” he said on opening day.

Tsabag said he was seeing a good response to the contemporary line Velvet Heart and the company’s new young contemporary brand, Free Heart. Buyers from Nasty Gal, ModCloth and Bloomingdale’s stopped by the booth.

“People are building inventory because they feel confident in business,” Tsabag said.

Burke, who was also showing at WWDMAGIC, said retailers have told him that business is growing. “I think we’ll have a good holiday,” he said.

The first part of the year was challenging for many Midwest retailers, who saw business affected by bad weather, said Greg Garrett, co-owner of Irvine-based Z Supply, which produces the White Crow and Black Swan collections. But many of those retailers saw business pick up following the Fourth of July holiday, Garrett added. “We’re getting an early read on fall right now,” he said. “We’re getting a lot of reorders.”

At the Pooltradeshow, exhibitors were pleased that the show was adjacent to Project this season.

Rojas said buyers are starting to feel more confident. “They are looking for new things no one else has to be more competitive and to stand out.”

Bryn Thomas, head of sales for Los Angeles–based Lip Service, said he thought traffic would have been stronger if the trade-show schedules had been staggered. A few years ago, when the shows at the Mandalay Bay opened a day earlier than the shows at the Las Vegas Convention Center, Thomas said, the company had one of its best shows ever and opened several new stores.

“Sales were up at least 20 percent for all brands,” he said.

The show featured a mix of lingerie, swimwear, sleepwear, loungewear and hosiery resources.

For many of the swimwear exhibitors, CurveNV@MAGIC came at the end of a season of swim shows, but several said the Las Vegas show gave them a chance to meet with boutique and resort buyers who may not have attended the earlier shows.

“This is a great platform for new business and resort buyers,” said Debby Martin, national sales manager/retail marketing for Irvine, Calif.–based swim brand L*Space by Monica Wise, which is a longtime exhibitor at CurveNV.

Nathan Chera, who represents the Anne Cole Signature, Cole of California and Anne Cole Locker brands, also said he saw a lot of resort and boutique brands. Chera said his company previously showed with other swim brands at MAGIC.

“This year is definitely better than last year,” he said.

Sands Expo and The Venetian

Now in its third year, the Liberty Fairs trade show has been tweaking its product mix since it first launched in August 2013.

“We finally got the flow of the show perfect,” said show founder Sam Ben-Avraham. “We have 20 percent of brands every season revolving [out of the show]. When it’s not the right mix, it interferes with the show. This season we had the ultimate brand selection.”

For Jim Kremer of Australian brand Shoreditch London, traffic at Liberty seemed a bit slow, but overall the show was successful.

“All of the people we wanted to see came to the booth,” he said.

Robert Myers, designer of SLVDR, said he thought traffic was on par with last year, but he expected sales to increase 25 percent over last year’s show.

“People come to Vegas to finalize their orders,” he said.

At Capsule, George Vause, USA sales and operations manager for the New Zealand–based brand I Love Ugly, said the show’s timing helps wrap up the season.

“It’s the finale,” he said. “It’s when you close orders and lock down accounts and pick up the money.”

That said, Vause added, “You always get a buyer who waits for Vegas to do all of their ordering.”

Vause said he typically sees more of the brand’s West Coast buyers as well as Japanese retailers at the Las Vegas show.

By the second day of the show, Wolf & Man had picked up orders from 20 stores.

This season, streetwear veteran Karl Kani was introducing his newly relaunched Karl Kani collection at Agenda. This was the first time in a decade that his brand exhibited at a trade show.

“People had been hearing the buzz that Karl Kani is back,” he said. “We wanted to establish that the brand is really out.”

Traffic was so busy at the show that Kani said he did not have time to leave the booth all day.

Stitch, MRket and Accessories The Show, the three shows organized by Business Journals Inc., were held in an adjoining space at the Sands.

Stitch, which consists primarily of contemporary womenswear, was brisk with business. This was the first time that Lori Marchand, owner of the Impulse Moda showroom at the Gerry Building in Los Angeles, was exhibiting her lines. She said she was doing particularly well with velvet burnout tops by Hariri.

Kristy Kurtmen was showing her family’s Kurtmen line of colorful leather cowboy boots, purses and leather bands at Accessories The Show. Her family designs and manufactures the boots and purses in Martindale, Texas, outside of Austin. They have been attending the show for five years and finding a following in the South, Midwest and West for their boots, which wholesale for $289 to $439. “The show has really, really been great,” she said.

At MRket, which showcases more-traditional menswear, exhibitors who made appointments were doing well. Tim Tobin, the regional salesperson for Robert Graham Clothing, was exhibiting dress shirts, tailored clothing and neckwear made by licensee Shirt Avenue in New York.

Shirt Avenue recently got the license for tailored clothing and neckwear and was eager to show the line. “It has been good,” Tobin said, noting that there was a cocktail party on the night of Aug. 17, the first day of the show, at the Mandalay Bay to celebrate the 15th anniversary of Robert Graham Clothing.

The Offprice show, held in the ground floor of the Sands, saw a 5 percent increase in exhibitors, according to Stephen Krogulski, chief executive officer of the show. The recent show featured 500 vendors exhibiting at 1,300 booths.

Offprice’s attendance has expanded from its base of traditional off-price retailers to include everything from individual Ebay sellers to independent grocery stores looking to add new products such as clothing basics and licensed goods such as sports team apparel.

At the WWIN show at the Rio All-Suite Hotel, specialty-store buyers were in abundance. The show lasted for four days—from Aug. 17 to Aug. 20—while most of the other apparel trade shows at the Las Vegas Convention Center and the Mandalay Bay Convention Center held court for three days. The WWIN show’s traffic on the first day was helped by the fact that it was open until 8 p.m. and serving cocktails.

Becky Paulson, owner of two A Corner Cottage stores in Greenwood, Tenn., attends WWIN because the merchandise she finds there appeals to two different generations. She was looking for reasonable prices and trendy styles, such as tunics, that can be worn by both a mother and her grown daughter.

Tina Dyba, owner of Diamond Diva in the Las Vegas suburb of Summerlin, said she was searching for feminine Western wear and trying to keep her retail prices to under $100. “It’s hard to sell to shoppers right now,” she said. “It is all about price and not about quality.”

In addition to the apparel and accessories trade shows in Las Vegas, retailers and brands looking for sourcing resources shopped factories and resources from around the world in the packed North Hall at the Las Vegas Convention Center. This season, the focus of the Sourcing at MAGIC show was wearable technology. Companies such as DuPont were showing off their stretchable inks for wearable electronics.

Jon Lou, a Staten Island, N.Y.–based startup, talked about its development of a fashionable handbag that can charge your phone or tablet and light up inside when opened.

While the emphasis might have been on new technologies, there were a lot of old-technology clothing manufacturers from around the world at the show. Governments and trade-promotion agencies sent companies from countries including Jordan, Egypt, Turkey, Bangladesh, Vietnam, Guatemala, Peru and Colombia.

There was a contingent of 65 companies sponsored by the Indian government. One of those was Aman Sadh of Aman Fashion, who has one factory with 150 workers outside of New Delhi. This was his first Sourcing show in Las Vegas.

But he will be back because he wants to expand his U.S. business. “We have to participate for two to four years for it to click,” he said.