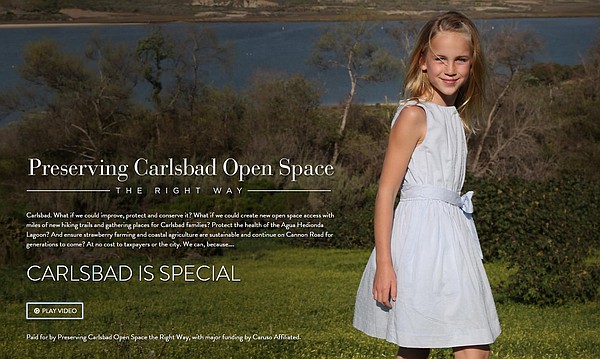 THE CAMPAIGN: The website for Preserving Carlsbad Open Space, a group that advocates for a land-use change favored by Caruso Affiliated

Last month a campaign commenced for a land-use change for 203 acres of waterfront real estate in Carlsbad, Calif., but lobbying for the campaign recently a high pitch.

Nordstrom Inc. announced that it was going to build one of its highly coveted full-line stores at the intersection of Interstate 5 and Cannon Road in Carlsbad, Calif. Caruso Affiliated, the developers, owners and managers of The Grove and The Americana at the Brand retail centers, has proposed to develop a 585,000-square-foot, open-air promenade on that spot in coastal North San Diego county. However, before construction can start, the plan must be approved by voters of Carlsbad. Caruso Affiliated must also acquire the land on Aqua Hedionda Lagoon. It is currently owned by the utility San Diego Gas & Electric.

Preserving Carlsbad Open Space The Right Way, a group operating with “major” funding by Caruso, according to the group’s website, started a campaign to collect voter signatures in May. However, emails to Caruso representatives specifically requesting an update on the signature campaign’s progress were not answered. The initiative is not currently scheduled on a municipal ballot.

Caruso’s proposal that might end up on a municipal ballot in Carlsbad is called the 85/15 Plan. It would devote 85 percent of the land on Agua Hedionda Lagoon as open space, which would offer access to the public. Fifteen percent of the land would be dedicated to a Caruso retail center, and revenue from the retail center, not the Carlsbad taxpayer, would finance the stewardship and management of the proposed open space.

Caruso Affiliated has spent three years taking suggestions on what Carlsbad residents wanted from a possible retail center. “We have learned that Nordstrom was the top-most request from the community when it came to retail. Our plans, envisioned as a gathering place for friends and family, truly reflect the desires and wishes expressed by the community. We are thrilled that Nordstrom has committed to be our fashion anchor, and as a best-in-class retailer, we are confident its presence will set the tone for the gathering place we are seeking to create in Carlsbad,” Rick J. Caruso said in a statement. He is the founder and chief executive officer of Caruso Affiliated.