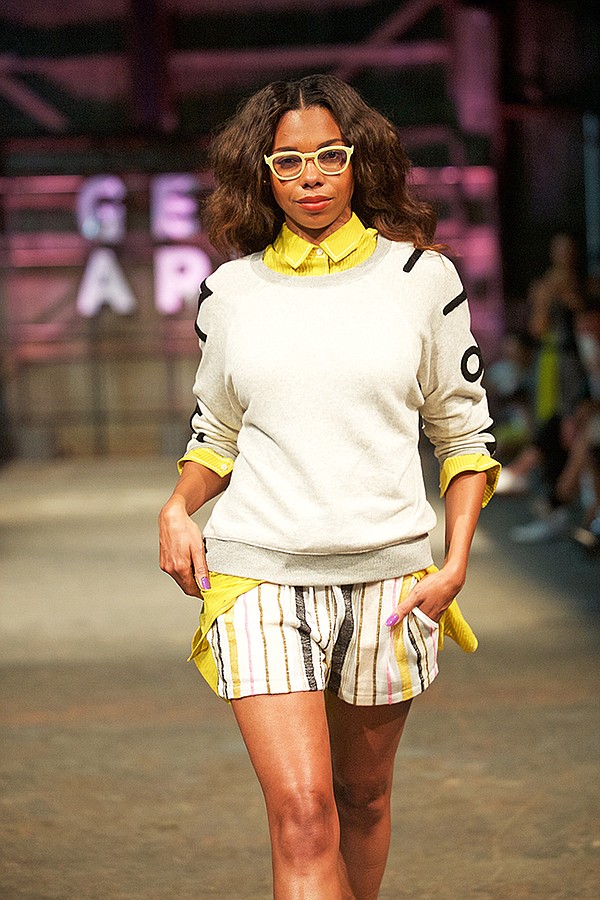 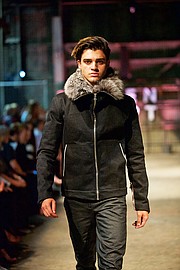 After a three-year absence from LA’s runways, Gen Art’s Fresh Faces in Fashion program raised the standard for mostly men’s styles Aug. 4 at Willow Studios, located in a gentrifying but still tough-looking section of the Los Angeles Arts District.

The night represented a runway comeback for downtown Los Angeles design house Elliott Evan. Label designer Elliott Giffis put together an installation at the Concept shows in 2012 and 2013. For Gen Art, he crafted a 19-look show called “Howard’s Distress,” which Giffis said called attention to the “raw edge of life.”

One look was a sharkskin jacket. The hem reached past the waist; it featured a diagonal zipper and a neckline that could cover the face, protection for someone who is going to brave the elements.

Other looks were motocross-style pants with exposed zippers. There were oversized, white-washed denim jackets and cotton hoodies with a streetwear edge. Giffis also created an installation for “Howard’s Distress” and its raw edges. Jackets were placed on mannequins with breathing apparatuses. Chest-cavity areas would expand and deflate. Footwear brand Rafa and jewelry collection Legier also assembled installations for the night.

Gen Art offered a place to take a runway bow for its other featured brands, such as Bristol Los Angeles. “This is the first runway show ever—either attending or participating,” said Luke Tadashi, Bristol’s cofounder. The brand had exhibited at trade shows such as Capsule.

Next for these brands, Gen Art will put them on a retail platform, said Keri Ingvarsson, partner/chief executive officer of Gen Art.

On Aug. 11, the brands debuted on e-commerce site Spring (www.shopspring.com). Starting Sept. 6, they go bricks-and-mortar. The Gen Art Concept Store at the Bloomingdale’s location in Manhattan’s SoHo neighborhood will open, and the store will offer looks from the Fresh Faces designers.