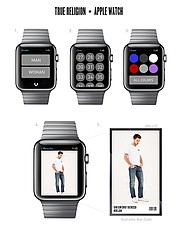 To find True Religion Brand Jeans’ next tech innovation, look no further than its bricks-and-mortar stores.

The denim brand’s initiative, called Band by True Religion, is scheduled to be rolled out in its stores in Los Angeles’ Beverly Center mall and New York City’s SoHo neighborhood in April. Some sales staff will be equipped with Apple watches. The watches will provide an insider’s look on everything that the label’s VIP shoppers want in jeans. It will perhaps give the sales associates a science-fiction edge on making a sale.

It starts with a customer downloading a True Religion app on her smartphone. When she enters the premium-denim label’s store, a salesperson’s smartwatch will bring up all kinds of information on the customer: How she likes to be contacted—text or email? What silhouette of jeans she prefers. Details on her “virtual closet” or the history of her True Religion purchases in the past two years or so.

If the customer has questions on a specific pair of jeans, the salesperson could summon information on the watch and then display images of the jeans the consumer would like on a big screen in the True Religion store. (The 42-inch big screen is part of True Religion’s Endless Aisle tech initiative, which started in late 2014. It set a foundation for the Band by True Religion initiative.) The smartwatch would have a connection to the label’s real-time inventory. If a customer wants to buy a jean that is not in the store, the sales associate can use the retailer’s omni-channel strategy and send the consumer jeans by free two-day delivery.

A quest for high efficiency was just part of the deal, Hazen said. The new technology will allow the sales associate to put on a show.

“They can make an experience,” he said. “People just don’t want to shop. They want an experience. Experience is the difference between a great retailer and a struggling retailer.”

Hazen compared the initiative to the mall scene in the 2002 science-fiction thriller “Minority Report.” The lead character, played by Tom Cruise, walks into a mall, and, because he has apps injected into his body, the futuristic retail technology calls to him by name and offers him personalized deals for product.

“Some people say it is absolutely terrifying,” Hazen said. “Others say, ‘I love it.’”

Retailers have been seeking this deep connection with their customers for years, he said. The initiative will further enhance sales performance and conversion in bricks-and-mortar stores. Stores are typically a forum where consumers make impulse purchases and conversion tends to be higher, Hazen said.

He forecasts that more than 10 percent of his brand’s loyal customers will provide the thorough information requested on the app. He also forecast that mobile commerce, or sales made from purchases from smart devices, will increase more and more quickly every year and dominate e-commerce. However, the retailer’s omni-channel strategy will perform at its best when stores and sales associates are robust parts of the strategy.

“You have to have sales associates buy in,” he said of the omni-channel strategy. “If they don’t, they are going to sabotage [omni-channel] tools.”

Others speaking at the Apparel West Forum included Ilse Metchek, president of the California Fashion Association, the prominent trade group, and Bryan Timm, a veteran fashion executive currently working for MadaLuxe, a distributor of luxury fashion to full price and off-price markets.

During her comments, Metchek noted research found that off-price is a major growth area in apparel retail. Another trend is the continued growth of e-commerce. By 2016, 60 percent of in-store retail purchases will be influenced by the Internet, Metchek said. She also noted that retail will continue to change rapidly.