Pastels and neon colors might as well be white noise to Brian Boles.

For his newly minted action sports–friendly brand, Wvs Brgde, the core styles only come in white, black and gray.

Those were the colors that he and his friends grew up wearing while surfing and skateboarding in Southern California. He regards it as a classic look. “I’m not looking for a fad,” said the heavily tattooed Boles from his company headquarters in Los Angeles’ Boyle Heights neighborhood. 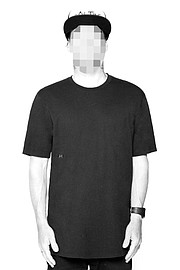 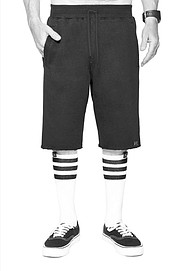 Wvs Brgde hopes to communicate a durability with its basics line, the Core Collection. The French terry fabric used for sweatshirts, tees, sweatpants and sweat shorts is heavy. T-shirts have a long hem. Sweatshirts are boxier and shorter. They are intended to be used as a layering piece, and the hems are short, so they can show the T-shirt underneath. Sweatpants and shorts are meant to sag in an urban style.

A minimal color palette doesn’t mean that the brand boxes itself into a uniform look. Wvs Brgde looks for offbeat logo placement. On some shirts, the three forward slashes that make the foundation for the Wvs Brgade logo are placed on the lower left rib-cage area, where Boles happens to have the Wvs Brgde logo tattooed on his body.

Boles works on graphics for the brand’s T-shirt program along with artists such as Ben Corn, a tattoo artist famous for inking the Chosen1 tattoo on the back of NBA champion LeBron James. Other work is done with downtown Los Angeles artist Alina Scherbakova.

Graphics come in graffiti-like script bearing the brand name or humorous statements. There’s also Day of the Dead and surfer characters on some of the line’s T-shirts.

Boles and his partner in business and life, Megan Godfrey, started working on Wvs Brgde in 2006. But the economy soured and they changed business plans to serve other companies. They set up a printing shop called Off the Wall Printing, where they have worked with clients such as 7 Jeans, James Perse and Outerknown. The line is self-funded and made in Los Angeles.

After racking up a decade of business experience, they made an official debut for the brand at Agenda trade show in Long Beach, Calif., last month. They’ll also be showing at Agenda in Las Vegas, which runs Aug. 14–16. The brand also is making wet suits, caps, beanies, accessories and hopes to be sold in leading action-sports shops and contemporary boutiques. Wholesale price points range from $19 to $39. For more information, email sales@wvsbrgde.com. 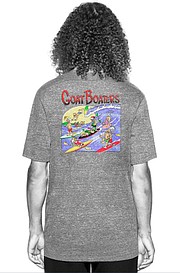 The GoatBoarders T is from a Spring/Summer ’18 collection. 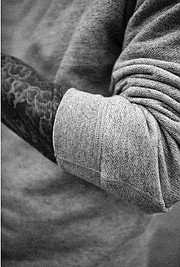