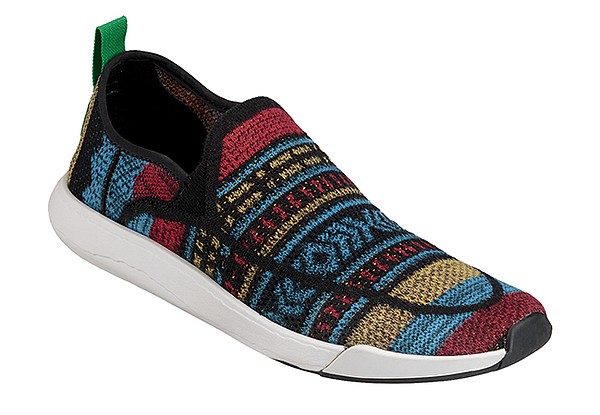 After more than two decades of making flip-flops and footwear for the surf and beach crowd, the Sanuk brand is trying apparel.

Sanuk, a division of Deckers Brands, based in Goleta, Calif., introduced its first apparel line last month at the Agenda trade show in Long Beach, Calif. Sanuk, a footwear brand that mixes comfort and an irreverent sense of humor, made news after Deckers paid $120 million to acquire Sanuk in 2011.

The brand’s first flip-flop on the market was a sandal covered with a material that looked like Astroturf. The flip-flop was dubbed “Furreal” after an incredulous buyer asked Sanuk founder Jeff Kelley if he was being “for real,” or serious, about selling flip-flops that looked like Astroturf. Since then, Sanuk has been sold at Nordstrom and Zappos, sporting-goods retailers such as REI, and surf specialty shops. It also currently runs a brand store in Orlando, Fla., and stores run by third-party businesses in Downtown Disney in Anaheim, Calif., and in Waikiki, Hawaii. It also handles its e-commerce on its brand website (www.sanuk.com).

Sanuk’s debut apparel line, made for Spring/Summer 2018, comprises mostly T-shirts, fleece and caps. The brand’s logo, dubbed the “Happy U,” something of a tiki with a happy face, will be prominently placed on the apparel line.

Magnus Wedhammar, vice president and general manager of Sanuk, said that the footwear line is making a foray into apparel because the brand’s loyal customers have been lobbying the brand to make a clothing line. Also, the brand has been seeking a bigger canvas on which to place the Happy U logo, and a T-shirt has more space than a flip-flop strap. Apparel will help the brand in its efforts to expand internationally. Wedhammar said that 90 percent of the brand’s sales are in America.

Sanuk hopes to provide an alternative with its clothing. “I always say that you don’t need another T-shirt,” Wedhammar said. “We don’t want to make more ‘stuff.’”

The brand hopes to give an alternative through features such as fabrics. Sanuk’s T-shirts and fleece will be made out of an ecologically sustainable fabric, which is composed of 60 percent recycled polyester. Like its popular sidewalk surfer hybrid shoes, some of the clothes have fraying edges.

Some of the clothes will offer similar fabrics to the footwear. Think colorful Mexican blankets.

Other looks will offer added functionality, such as a trucker hat with a hidden flap to hold credit cards.

Looks will include crew-neck T-shirts, pocket tees, sweatshirts, Aloha-style T-shirts and serape-like changing towels intended to cover surfers when changing out of wet suits and boardshorts on the beach. Retail price points will range from $20 for a cap to $80 for a fleece top.

The Sanuk clothing gambit comes during a period of a rebound for Deckers. In its fourth fiscal quarter of 2016, Deckers, a public company, announced a restructuring plan. It consolidated brand operations and company headquarters and closed 25 of its retail stores, according to financial documents released June 30.