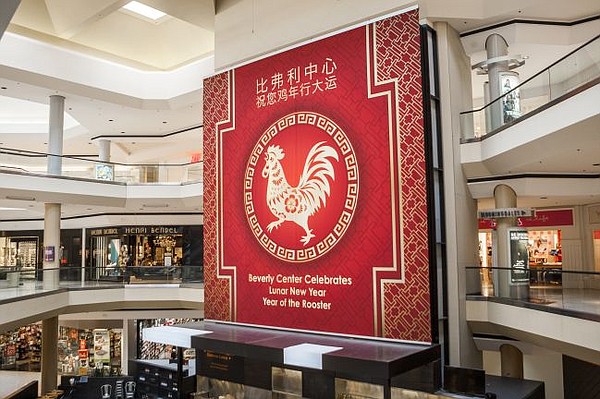 Beverly Center's Year of the Rooster

The 2016 Winter Holiday Season is a memory now. Time for another holiday! Chinese New Year is about to start. Traditionally, the month-long holiday it is celebrated between mid-January to late February. 2017 corresponds with the Year of the Rooster, and California malls, especially those located in areas with significant Chinese-American communities, have gotten into it in a big way.

At Los Angeles’ Beverly Center, banners and a traditional Wishing Tree have been installed for the New Year. (In previous years, celebrities such as Jeremy Lin, a former Los Angeles Laker, and currently playing for the Brooklyn Nets, have been photographed by the retail center’s Wishing Tree.)

Until the end of the holiday, Beverly Center shoppers who make purchases of $500 or more will be presented with New Year red envelopes packed with holiday gift cards. The holiday will be observed until Feb. 10…right on time for Valentine’s Day!