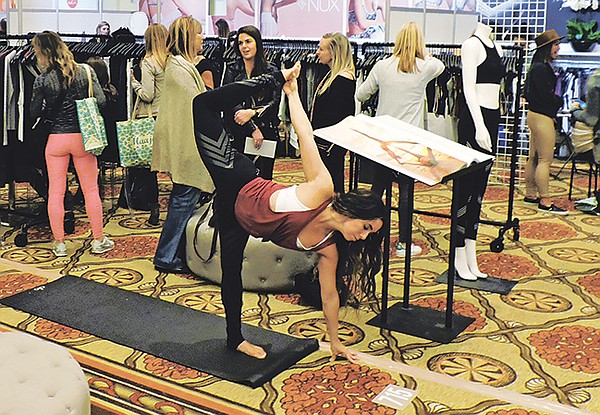 A yogi strikes a post at the Alo Yoga booth at Active Collective in Huntington Beach, Calif. The trade show was held concurrently with its sister show, Swim Collective.

Swim Collective and Active Collective Kick off the Year in Huntington Beach, Calif. 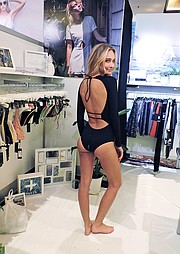 Visitors to the Jan. 13–14 run of the Swim Collective and Active Collective trade shows at the Hyatt Regency Resort and Spa in Huntington Beach, Calif., got a break from the rains that had been soaking California since the beginning of the year. Buyers from across the region, as well as several from across the country and a handful of international buyers, turned out under sunny skies for the two shows. Last August, Surf Expo and Outdoor Retailer owner Emerald Expositions acquired both shows from founder Shannon Leggett, but there was little difference to the look of the shows, which were held on several floors at the hotel.

Several exhibitors said the two-day shows got off to a brisk start.

“We’ve been busy from the get-go,” said Richard Gual­tieri, vice president of Canada-based MPG Sport, the activewear company that sells in core sporting-goods stores such as REI and Title 9 and produces the MPG By Julianne Hough Collection with “Dancing With the Stars” dancer and judge Julianne Hough. “We had appointments and a lot of drop-bys. The three of us were working appointments, and then two more people would show up.” 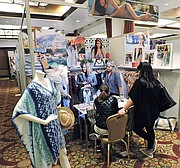 Gualtieri said MPG has expanded its focus from core activewear to also include something he calls “technical casual.”

“They’re pieces she’s going to want to wear to work,” he said.

Pieces in this category included a quilted sweatshirt, a black denim print and a relaxed pant in pin-striped navy.

For men, new pieces included merino base layers, an antibacterial group made with polygiene silver and technical silk. There’s a technical blazer with a zip-out hoodie that can double as a no-wrinkle travel blazer.

“Our job is to anticipate what’s next,” he said.

We Are Handsome, the Australian swim brand that relocated to Los Angeles last year, was showing both swim and activewear at Active Collective.

“We’ve had active for two years,” she said. This season, buyers were looking for high-waist leggings and jackets that can be mixed with ready-to-wear.

Nicole Atias, vice president of sales for X by Gottex, was showing the recently launched activewear line at Active Collective while the company’s longstanding Gottex swim collection was part of the lineup at Swim Collective. 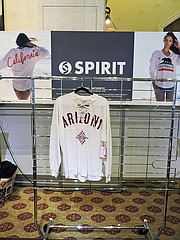 “We’re doing a lot of business with resorts, hotels and cruise lines,” she said. “It’s all good. The beginning of the year has been great for reorders.”

At Electric & Rose, owners Eric Balfour and Erin Chiamulon said the company has been on a growth tack, having recently launched at Barneys New York and in Anthropologie stores.

“It’s exciting to see people react to what Electric & Rose is as a lifestyle—this Venice idea,” Balfour said.

Buyers were picking up the line’s styles in cotton/spandex mesh.

“It’s becoming our signature,” Balfour said. “It has a laid-back Southern California vibe.”

L’Etoile Sport has been showing with Active Collective since the beginning, said Lindzi Rebernik, director of operations for the New York company with a chic, preppy, golf-inspired look.

“Traffic has been good,” she said. “We’ve met a few new people and our regulars.” 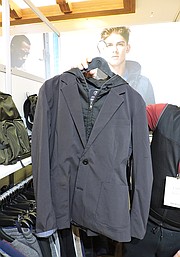 This was the first time at Active Collective for Miel, the Montreal-based collection of seamless lingerie basics.

This was also the first time at Active Collective for Portland, Ore.–based Love Bottle, a resuable glass water bottle made in America from recycled glass.

“When you drink out of glass, it tastes better,” said Nicole Harrington, director of sales and operations.

Love Bottle sells in natural grocery stores such as Whole Foods as well as in some online retailers.

“We do really well in boutiques. It’s a good gift item,” she said. “We think like-minded people will be here [at Active Collective].”

Signs of summer at Swim Collective

At the Swim Collective show, reps were meeting with buyers from swim shops as well as resort and spa boutiques from across the country and to a few international stores.

Love Bottle is made in the U.S. from recycled glass.

“This is always a great show for us,” said Kim Lunetta, director of sales for Helen Jon.

“Everybody is still a little cautious—especially about the weather. But we make our line domestically so we’re able to chase production.”

At the Raj Swim booth, Marie Takeshita, senior vice president of sales, and Brenda West, president of the company, were meeting with both existing retailers and potential new ones.

“We met with four new accounts this morning—and one was brand new,” Takeshita said on opening day. “People are positive, but we’re in a business that depends on the weather.”

“We come into the show with as many appointments as possible,” she said. “But we had a lot of stop-bys, too.”

In addition to local stores, Vohs said she was meeting with buyers from across the West and Northwest, include larger accounts such as Zappos.

“It’s still early for swim, but we’re off to a great start,” she said. “The timing is good. We’re showing Summer and early Cruise. Not everyone will be ready for early Cruise. They can come back to Resort if something is selling.”

“Cover-ups continue to be strong—especially this time of year when she’s going on vacation to a resort and she wants the whole ensemble,” she said.

Designer Rod Beattie said customers were responding well to styles that were “covered up but sexy and modern.”

“One-pieces have been very strong,” he said. “Our customer, in general, wants construction. She wants an underwire. But it’s modern construction. It’s very subtle.”

All the sales team at Tavik were busy with back-to-back appointments.

“It’s been so busy since this morning,” said Jillian Leeman, vice president of sales, at the end of the first day.

Buyers came from across the western U.S., including from California, Utah, Texas and Washington. Tavik recently launched at Madewell for J. Crew as well as at Free People.

“It’s been one year and one season since we moved production from China to Orange County,” Leeman said. “It really focused us on the product and the fit.”