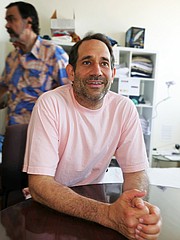 It’s a 100,000-square-foot factory for a new basics line called Los Angeles Apparel. The line is his follow-up to American Apparel, the basics company he founded in the late 1990s.

American Apparel was a magnet for attention with its risqué ad campaigns; the way it championed new T-shirt silhouettes and fabrics; its company culture, which boasted of compensating its sewers and workers with the highest pay in the world of apparel manufacturing—and also corporate drama. Charney was forced out of American Apparel in 2014. After his failed attempt to retake the company, it filed for chapter 11 bankruptcy and was acquired by Gildan Activewear for $88 million earlier this year.

A few months ago, the South Los Angeles factory for Los Angeles Apparel started making T-shirts, hoodies, bodysuits and nearly everything that American Apparel made. On June 16, the company launched its wholesale website, www.losangelesapparel-imprintable.net. Eventually the site will branch out into the consumer business. The privately held company recently wrapped up a Series A round of funding.

The new brand’s website devotes a page to its mission, which is very similar to American Apparel’s. The company hopes to eventually employ thousands of workers. It will buy textile and yarn products made in the U.S., sourcing recycled cotton as well as dyeing and finishing fabrics locally.

On June 20, Charney spoke to a tour group of journalists and members of the Fashion Business Inc. entrepreneurial education nonprofit. FBI led the tour of the Los Angeles Apparel plant, which is located in a facility that was formerly an American Apparel factory. About 90 percent of the factory’s machinery once was used to make American Apparel. About 400 people work there, many alums of American Apparel.

The brick-walled space is covered in a ceiling of skylights. Lobby walls are lined with photo portraits of the famous Dogtown skateboarders, who pioneered the sport and the lifestyle of skateboarding in the 1970s. A design room features paintings created by Charney’s grandfather Hymie Charney. It’s a dog-friendly factory (as was American Apparel), with a couple of dogs owned by staff wandering around the space. It’s also a second home to Dov Charney. He keeps a bed in his office for stints at the plant when he doesn’t have time to return to his home in Los Angeles’ Silver Lake neighborhood.

During a talk with FBI members, Charney said that he was optimistic about the apparel business and domestic apparel manufacturing, even during times of great change. “There is so much opportunity,” he said. “Don’t listen to crybabies. Get dirty, roll up your sleeves, change things.”