“There was a new, positive energy to the show,” said Stephanie Harris, the sales representative for several lines including Habitat Clothing, Caite and JOH Apparel. “The buyers were super upbeat about their fourth-quarter sales, and they were willing to place orders through December 2018. I broke Fall with Habitat and my line Orientique Australia. My other lines will break their Fall collections at the April show.”

This January show had nine fewer exhibitors than last year, said Mary Taft, the new executive director of Fashion Market Northern California, but exhibitors were seeing an upswing at the Jan. 28–30 event, which highlighted Summer fashions.

Harris, based in Santa Rosa, Calif., said she worked 27 accounts this year compared to 23 accounts last year, with her wholesale price points, which range from $30 to $50. “I am in that perfect price zone, which is why my brands are doing well,” she said. 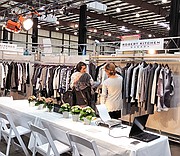 For Emmalena Bland and Bea Gorman of Salt & Pepper Sales in Los Angeles, the trek up north was profitable. “It was well attended and good for us,” said Gorman, who reps lines such as casualwear Bryn Walker and Australian-made Banana Blue. “We opened four new accounts, with one being in Oregon. One of our customers from Arizona who always does Los Angeles Fashion Market ventured to San Mateo last year and liked it.”

The show organizers have been doing more extensive marketing to reach more buyers by offering first-time attendees a free night’s stay at a hotel to help out with expenses.

Noblu Clothing, based in Sonoma, Calif., has been attending the FMNC show for years and also noticed that retail activity is picking up. “January is usually a little slow for us at the show, but I had some of my bigger stores come in and I was able to meet my goal,” said Tatiana Llamo, the West Coast sales representative for the line, known for its artsy take on clothing for a misses customer who wants style in her wardrobe. “I had some people who came in and gave me a lot of hope that business is coming back to the market. And then there is the other side where some buyers are cautious about what is the next thing to happen.”

A relative newcomer to the show was Neda Khaki, who recently launched Paisley and Pomegranate, a fair-trade fashion line where many pieces incorporate hand-blocked prints, vegetable dyes and natural fibers. This was her second show.

She had about seven to eight stores placing orders. “Some placed big orders and some bought only four pieces,” she said. “Since I am new, I am learning and exposing my brand.”

Another relative newcomer was Ann Maurice, who has a self-named label of scarves and outerwear. She used to attend the San Francisco International Gift Show until it closed a few years ago. She likes the trade show for its convenience to her home and office in Occidental, Calif., and its ease of getting in and out. She was upbeat about the latest show. “Our retailers told us they have nothing left after the holidays so they are looking to restock,” she said.