Bridging the Cultural Divide Through Fashion 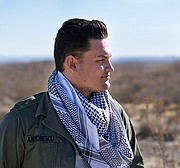 For Alexander Andronescu, becoming immersed in Middle Eastern and south Asian cultures was not something that was passed down to generations in his family.

But in his early teenage years, the Los Angeles native became fascinated with finding out more about how these regions developed their art, such as calligraphy and poetry.

With the imminent launch of his Fall/Winter 2018 collection, Alex of Arabia, Andronescu hopes to share the similar connections to this culture with a Western clientele.

“My biggest goal is to show the world this beautiful part of the planet,” he said. “If you look at a lot of the clothing that I put out, it features Arabic and Persian calligraphy. There is a lot that has gone into that. I removed the stigma from it by taking it out of the context of something political or religious and putting it on beautiful clothing.”

Long before he appeared as a contestant on the “Project Runway” spinoff—“Project Runway: Threads”—in 2014 or studied at the Fashion Institute of Technology in New York and completed his education at Polimoda in Florence, Italy, Andronescu was teaching himself Arabic. 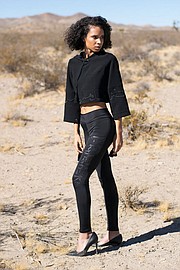 He often wondered how he could dig beyond the stories found on television to find out more about the beauty of these cultures. During his time spent in Europe, he traveled to Spain, Germany, Romania and Greece but couldn’t help notice the Middle Eastern influences in southern European culture.

After meticulously researching the Arabic and Persian proverbs that fascinated him, Andronescu found beauty in the words, which affected him profoundly.

“The letters in Arabic—in my mind—just dance for me, so I wanted to understand it and that grew into a passion for Farsi, Dari and Urdu,” Andronescu explained.

When designing Alex of Arabia, he wanted to bring a personal touch to the aesthetics of his Fall/Winter 2018 collection, leading him to handwrite the Arabic characters that appear on the clothing.

As Andronescu continues to grow as a designer, he is also evolving in hisunderstanding of artistic methods used to create this calligraphy. While he has practiced handwriting characters for more than a decade, to properly showcase the culture in an authentic manner he now studies with local artists in the regions that have fascinated him for years. 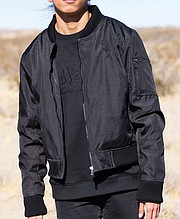 “I just completed my first trip to Pakistan, where I was able to practice more calligraphy with artists who could show me techniques in reading and writing,” he revealed. “The poetry here is so rich.”

He has included some of his favorite quotes by printing the words on some of the sportswear pieces for men and women, such as the Persian proverb that says, “Someday your sorrows will blossom into a beautiful spring in your heart.” Printed on the “Laila” hoodie and men’s jacket, these words are intended to bring hope while creating quality clothing for his clientele.

As he prepares for the August launch of his collection, Andronescu doesn’t neglect to highlight how Los Angeles has influenced his work. Despite his use of details that were inspired by the languages and art in the Middle East, the Los Angeles influences from his upbringing in this region shine through in the Alex of Arabia pieces.

“There is quite a bit of diversity in this collection in terms of sportswear and an elevated look,” Andronescu said while reflecting on the Los Angeles influence. “There is a larger target market in that sense because we offer a very mature look that can be worn to more-formal events as well as quite elaborate sportswear.” 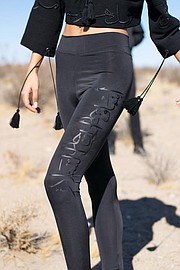 In addition to searching for manufacturing partners in Los Angeles, he sources his fabric locally. He is also bringing pop-up events to Los Angeles when promoting the launch, which will begin with e-commerce and eventually expand to include retail partners.

“We believe e-commerce is the best way to promote Alex of Arabia, with the inclusion of a few pop-up shops,” Andronescu said. “The message is to show the entire world this beautiful thing.”

The Fall/Winter 2018 launch of Alex of Arabia features 16 garments, which includes streetwear for men and women and feminine dresses and blouses. Andronescu also designed three accessories for the upcoming season—a feather choker, tassel clutch and “Hizam” backpack. The pieces will be available at wholesale price points between $40 and $200.

The plan to design a line that is inspired by Middle Eastern and South Asian artistry while sourcing fabric and manufacturing his collection in Los Angeles is a testament to Andronescu’s efforts to forge a greater connection between these cultures and the West.

“Fashion is far more than just a garment. As designers we have a mission and every designer has a different mission,” he said. “I personally feel a strong passion and conviction that my mission as a designer is to display the beauty of the Middle East to the world in a new way, thus bridging the gap.”