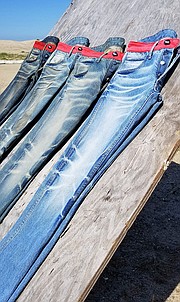 Fashion designer Trinidad Garcia III, a former sergeant in the U.S. Marine Corps, believes military-inspired fashion gets it all wrong.

Those insignias in fashion, even camouflage patterns and fabrics, don’t have an authentic look.

That is why Garcia set out to correct that with his independent denim line Trinidad3—a collection he launched in 2017 with a crisp military style.

For Spring 2019, Trinidad is offering 48 styles, which include jeans with a waistband made with red denim. It’s reminiscent of the blood stripe on a Marine’s dress pants. Buttons are made with gun-metal plating.

Going against the current trend, Trinidad3 doesn’t offer relaxed styles, but his raw denim will have a crisp look reminiscent of military dress-uniform pants. “I call it refined ruggedness,” he said. “The base of the pants is a sharp, rigid denim.”

The fabric is made from Japanese selvage denim, inspired by the time Garcia was stationed in Okinawa, Japan. The brand also uses Cone denim, manufactured in Mexico from U.S. cotton, and denim from Mount Vernon Mills in Georgia. 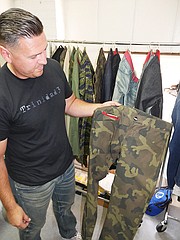 Trinidad Garcia holds a camouflage bottom from his line. | Photo by Andrew Asch

Other unique details include eliminating the coin pocket, a staple of typical five-pocket jeans. In its place, the jeans have a wider and deeper cell-phone pocket.

Trinidad3 also offers canvas and twill pants made with camouflage patterns inspired by Marine Corps designs as well as T-shirts, hoodies, woven shirts and jackets. His collection retails from $120 to $375.

Garcia is making his trade-show debut this January at the Liberty Fashion & Lifestyle Fairs in New York City.

The line already has gotten approval from vintage-denim star Eric Schrader of Junkyard Denim, based in Boise, Idaho. “It looks good, but it is not loud like other brands. What is behind Trinidad3 makes all the difference to me,” he said. “[Most denim lines] are trying to tell a story that will separate them from others. But it’s all about them. Trinidad is the opposite. It’s all about doing for other people,” he said.

Along with offering a unique military style, Trinidad3 has a social purpose. Garcia eventually hopes to employ veterans to make his jeans. Vets have worked on some of the brand’s special projects, and the line has raised funds for veterans’ nonprofits, including those that help wounded veterans deal with post-traumatic-stress disorder.

Trinidad3 is made at M.E.K. Pattern Making Inc. in Huntington Park, a short drive south of downtown Los Angeles. M.E.K’s president, José Argueta, is the chief operating officer of Trinidad3.

One reason Garcia manufactures in Los Angeles is rooted in his belief in service. He wants to help build the local economy and pay higher wages to domestic apparel workers. “Yes, it is more expensive,” he said about manufacturing domestically. “But we should do the right thing. I’d rather get paid less and pay people more.”

Garcia is scheduled to work with Schrader next year on a special Prisoner of War line. The denim line also will focus on wovens and raise money for veterans with PTSD.

Before joining the Marine Corps, Garcia signed up for high-school sewing classes in Oxnard, Calif., but his dad demanded he drop the classes, he said.

After high school, the budding designer tried to launch a T-shirt and outerwear collection called TG3. To support the brand, he started a trucking company. But his used trucks were always breaking down. In three months, he racked up $57,000 in repair bills as the price of diesel fuel was also steadily increasing.

Trinidad Garcia at his office in Huntington Park, Calif. | Photo by Andrew Asch

In 2008, he shuttered the trucking company, dissolved the TG3 brand and joined the U.S. Marine Corps at the age of 31 after being granted an age waiver for being over the maximum enlistment age of 27.

Trained as a machine gunner, his first deployments included training Marines for the Thai and Philippine armed forces while he was based in Okinawa. From 2012 to 2013, he was assigned to inspector-instructor duty, which included informing families when their loved one were killed in combat.

In 2016, he was honorably discharged even though Garcia loved the service and the camaraderie of the Marines, but he never forgot his dream to start a fashion line. While stationed at a Marine-reserve training base in Pico Rivera, Calif., he took classes at the Fashion Institute of Design & Merchandising in Los Angeles and earned an associate degree in apparel-industry management and then earned two advanced-study degrees in menswear and the business of denim. At FIDM, he was president of the design school’s chapter of the Student Veterans of America, which had grown to 60 people when he left earlier this year.

He started his brand while studying at FIDM last year and started doing pop-up shops for it around California, in Santa Barbara and Ventura and at the Rose Bowl Flea Market in Pasadena.

Currently there’s a display of Trinidad3 at the Handcrafted LA emporium for independent brands at The Bloc retail center in downtown Los Angeles. It’s also sold at his e-boutique, Trinidad3.com.