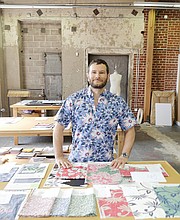 Since the late 1950s, the Reyn Spooner brand aimed to be an Aloha shirt that defied stereotypes.

It wasn’t entirely about luaus and bonfires at the beach. Rather, it was the Aloha shirt of the downtown Honolulu businessman. Reyn Spooner represented a sense of ease and sophistication.

The brand’s Hawaii-based artists made prints of the islands’ unique plants and ocean scenes, which were reproduced on Spooner cloth, a reverse-print fabric that gave the shirt a unique, gently faded look.

For decades, Reyn Spooner cultivated the reputation as the go-to company for the Aloha shirt. It was sold at the high-end department store Nordstrom, and, until recently, it made uniform shirts for Trader Joe’s employees.

Reyn Spooner shirts have also appeared in the film “The Descendants” and the Netflix series “Arrested Development.”

Now the Aloha heritage brand is looking to expand and cultivate new markets by building a full-fashion collection, which will feature swimwear, woven bottoms, sweatshirts, tees and clothes for women and kids. 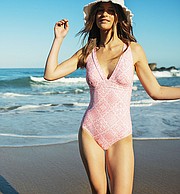 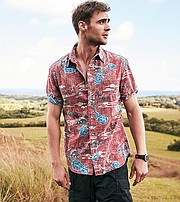 In 2015, a controlling stake in Reyn Spooner was acquired by Aloha Brands LLC, whose chief executive is Charlie Baxter, a board member for the prominent Japanese e-commerce company Rakuten Inc.

With the new purchase, Reyn Spooner in 2017 switched its headquarters from Hawaii to a 6,000-square-foot building in an industrial neighborhood of Los Angeles’ Boyle Heights. Neighbors include a Velvet Hearts office and a nine-story Sears building designated a historic landmark in 2004.

In the back of the industrial-chic Reyn Spooner headquarters, there’s a 50-square-foot vegetable garden where cabbage, carrots and tomatoes are grown by the building’s gardener.

In Hawaii, where an art studio is still located, the brand keeps an archive of thousands of prints that Reyn Spooner artists have created since the 1960s.

With the move in 2017 to Los Angeles, two new executives came on board: Lynne Koplin was named chief executive and Doug Burkman was named creative director.

“I am focused on evolving the brand while maintaining the Aloha spirit,” said Koplin, who in the past has worked as an executive for brands including True Religion, Tommy Bahama and Apparel Ventures. “We are introducing slimmer fits, new fabrications and fun collaborations. The key to making the business successful is making it more relevant than just six months a year but still capturing the attitude of the tailored Hawaiian shirt.”

Burkman often visits the brand’s archives in Hawaii for inspiration and for a deep dive into the label’s history. He also gets a sense of where he can take the brand. “When you are in the archive and surrounded by the prints, you start absorbing what is and what is not the Reyn Spooner look,” Burkman said. “It’s not the Waikiki Aloha. We’re a more sophisticated Aloha.”

Reyn Spooner recently released some looks from its new expanded collection, whose core retail price points are $98 for Aloha shirts, $85 for swimwear and $138 for rayon shirts.

The Summer 2019 selection features rayon shirts, which is a departure from its reverse-print fabric. “In order to appeal to the new generation, we’re adding new fabrics to the mix,” Burkman said. “We love our lifelong customers too. We will continue to offer prints that he loves as well as offering the Spooner cloth.”

New looks include new logos. There’s the Sun Man. It’s a humorous, action sports–style logo of a harlequin holding a surfboard, which is an update of the brand’s 1960s logo. It will be placed on men’s swimwear and T-shirts.

For the collection’s other looks, there’s the Tapa—a glyph-like symbol reminiscent of waves and vines, Burkman said.

In the past, Reyn Spooner made special Aloha shirts for select Major League Baseball teams such as the Los Angeles Dodgers and the New York Yankees. This summer it will offer Aloha shirts with team logos for every MLB team as well as shirts for the NBA’s Los Angeles Lakers.

On June 1, it will offer Aloha shirts inspired by national parks, including Hawai’i Volcanoes National Park and Yosemite National Park.