The Black Design Collective held its inaugural scholarship celebration at the downtown L.A. campus of the Fashion Institute of Design & Merchandising, where the red carpet at the FIDM Museum was filled with celebrities and public figures, including actors Gabrielle Union and Loretta Devine; supermodel and actor Beverly Johnson; Congresswoman Maxine Waters; designer Perry White; and designer Tina Knowles-Lawson, mother of singer Beyoncé Knowles-Carter. Los Angeles Councilmember Curren Price Jr. was also in attendance to present a city proclamation to the Collective’s founders.

The Black Design Collective was launched in October 2018 by veteran designers Angela Dean of DeanZign; Kevan Hall, known for his high-end eponymous label; and Thomas “TJ” Walker, co-founder of Cross Colours, to bring equitable opportunities to talented black designers, promote their historical influence on global style and award a scholarship to a deserving student.

At this first event, the designers honored Academy Award­–winning costume designer Ruth E. Carter, whose over 30-year career has spanned more than 40 film and television projects, including the blockbuster “Black Panther,” for which she became the first African American artist to win an Oscar for best costume design. 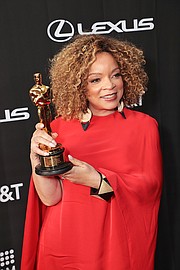 “When you think about black designers, a lot of people don’t have a reference for them, they don’t know some of the great designers that changed fashion and they don’t know a lot of the current designers,” said Hall, who is the Collective’s vice president. “You can work for a company freelance for 15 years and not get a post as a designer. That is ludicrous.”

The Collective’s three founders have a special tie to FIDM. Dean and Hall are alumni of the design school while Walker is a teacher there.

Barbara Bundy, FIDM’s vice president of education, was proud of the school’s role in the inaugural event. “It was touching to have so many alumni and a community celebrate Ruth Carter,” she said. “With her fabulous pieces from ‘Black Panther’ on display here, it was a natural fit to hold this event on campus.”

Beverly Johnson, whose modeling career included her being the first African American model to appear on the cover of American Vogue, in 1974, revealed her hope for the Collective’s future. “My hope is the same as my hope for anyone who is pursuing a profession,” she said. “It’s that we’re given the opportunity, that we have a seat at the table in the boardroom and have a seat in being a CEO of a manufacturing company.” 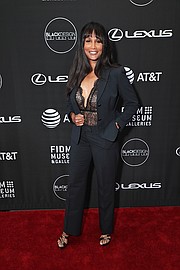 Black Design Collective President Angela Dean said celebrating Carter’s work was a long overdue gesture and testament to the costume designer’s body of work. “[Carter] needed to be recognized and honored,” Dean said. “The depth of her work from ‘Amistad,’ ‘The Butler’ and ‘Malcolm X’—all of these movies were monumental, but to have her not acknowledged for it was a missing link.”

“My business partner and I met the challenges, but we [the Black Design Collective] want to set up a platform that helps young and older designers to navigate through,” he said. “That is something that was missing, and we can help solve that problem.”

Upon being awarded the inaugural Black Design Collective honor, Carter explained how she looked back on her career path and shared her hopes for the future.

“A first is supposed to blaze a trail, blaze a path. I wasn’t focused on blazing every path. I was focused on blazing my path, hoping to have some support,” she said. “[Now] here comes an organization that is all about support and inclusion. We should support that in every single, solitary way.” 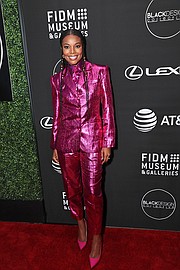 While the night honored Carter, it was also about future designers. FIDM student Devert Monet Hickman was awarded the Black Design Collective’s $10,000 scholarship. At the presentation, he revealed his costume-design dreams and sharing his vision with the world but also pledged to lead by the example shown by Carter and “pass the torch.”

“Getting this Black Design Collective scholarship will allow me to bring that out of my soul and show you what I have,” he said. “I really want to pass the torch just like she did. I am sure there are other black designers out there in the backwoods of Kentucky where I am from that want to be just like me and look up to me. I want to carry that torch and show them that they can, too, be right here in front of FIDM, where it all started.” 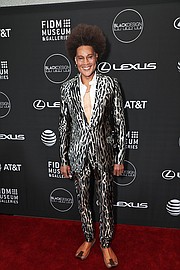