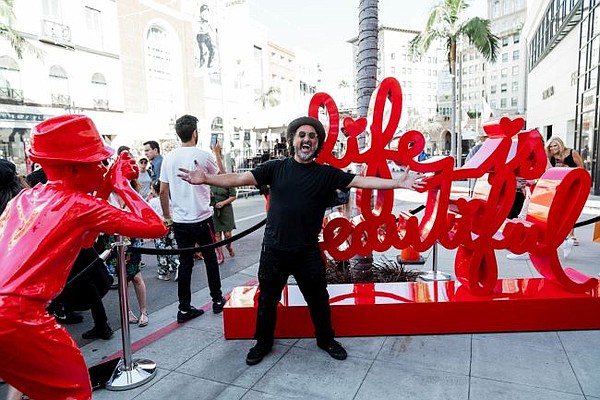 Mr. Brainwash unveils statue on Rodeo Drive on Aug. 1. Photo by Lex and Tim for @scottclarkphoto

Beverly Hills boutiques and eateries partied for the sake of staying open late on Aug. 1. Street artist Mr. Brainwash helped with the festivities by unveiling a statue on Rodeo Drive.

The stay-open-later schedule is part of a program called BOLD; Beverly Hills Open Later Days. Shops and eateries are encouraged to stay open to 8 p.m., compared to typical closing times of 6 p.m. or 7 p.m. Along with Brainwash unveiling art, KTLA Morning News anchors Sam Rubin and Jessica Holmes made an appearance. Cristina Ramos of "America’s Got Talent" also performed.

The city will produce BOLD events for each weekend in August. On the weekend of Aug. 8, design showcases will be displayed on the 300 and 400 blocks of Rodeo Drive. On the weekend of Aug. 15, people will be able to get photos taken outside the Dolce & Gabbana shop, and have the photos posted on a mosaic wall. During the weekend of Aug. 22, live actors will put together set pieces and environments outside the Chanel and Salvatore Ferragamo boutiques. Each August weekend will feature architectural tours led by Phil Savenick, president of the Beverly Hills Historical Society. Savenick will lead two separate tours, which start at 6 p.m. and 7 p.m. each weekend night. The tours will start at Two Rodeo Drive.