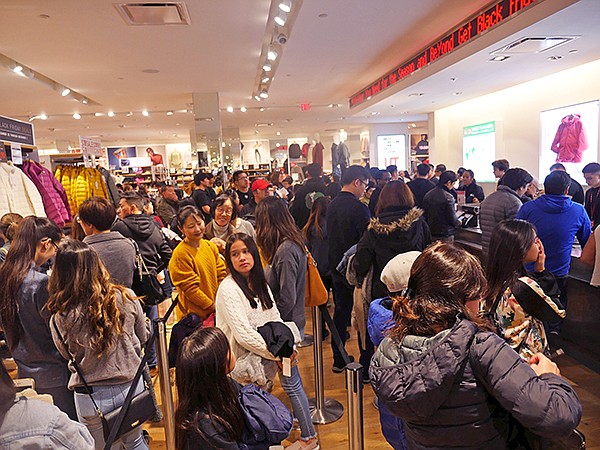 Black Friday shopping broke records, according to the National Retail Federation. In a Dec. 3 conference call, the Washington, D.C., retail trade group said that 189.6 million U.S. consumers shopped during the Black Friday Weekend. That reflected a 14 percent increase in consumers shopping compared to the 2018 Black Friday Weekend. During that weekend, 165.8 million Americans shopped, according to Matthew Shay, the NRF’s president and chief executive officer.

“There was strong momentum as we went into the past five days. Retailers reached into that momentum and offered great deals,” Shay said. “Consumers responded by getting into the holiday spirit earlier than normal.”

The increase in people shopping during Black Friday was rooted in a good economy, Shay said. Unemployment is low—3.6 percent in the U.S. in November—and consumer confidence is relatively high.

Fashion and apparel categories and department stores were two of the winners during Black Friday. Cold, wet weather across much of America sparked a demand for winter clothing. In Los Angeles, the weekend’s weather was the coldest in more than 20 years, and demand for jackets in the city increased 5 percent during the weekend in a year-over-year comparison, according to Planalytics, Inc., which measures how weather affects business and has offices in Berwyn, Pa., and London.

During the call, Shay forecasted that retailers wouldn’t experience a lull between the frenetic shopping periods of Black Friday Weekend and the weekend before Christmas. A lull has marked past holiday seasons.

“This year the economy is in a better place. I think that we’re going to continue the momentum of the season,” he said. “There will be a sprint to the finish. There will be a lot of robust activity.”

The NRF was not the only group to announce vigorous sales during Black Friday Weekend. Adobe Analytics reported Dec. 2 that retailers made $7.4 billion in online sales by the end of the shopping period, which was Dec. 2, according to media reports. Salesforce, a San Francisco–headquartered customer-relationship management group, reported that retailers made $8 billion in digital sales during the weekend. Digital sales enjoyed an increase of 11 percent compared to the same time period the previous year.

The weekend also enjoyed a boost in the amount of money consumers spent. The survey found that the average consumer spend was $361.90 during the Black Friday Weekend compared to $313.29 in 2018.

During the NRF conference call, a reporter asked about the missed NRF forecast during the 2018 holiday and if there were a possibility that the forecast would be missed this year. In 2018, retail sales increased 2.9 percent. Earlier in 2018, the NRF had forecasted holiday sales to grow 4.3 percent to 4.8 percent.

Jack Kleinhenz, the NRF’s chief economist, replied that the 2018 holiday season was affected by interest-rate increases that shook the stock market at the end of 2018.

“It was an unusual December,” he said. “There would have been a much higher performance if we hadn’t seen several factors. We don’t have the same set of factors that we saw a year ago.”

Southern California retailers described big business during the weekend. Debra Gunn Downing, executive director of marketing for South Coast Plaza in Costa Mesa, Calif., said that shoppers had queued up big lines in front of the center’s Macy’s at 5 p.m. on Thanksgiving. She expected crowds to continue to be strong at the luxury mall. “We had a strong year and fourth quarter,” she said. “We have strong expectations going into the holiday season.”

“We got a burst of business,” he said. “Normally there’s a lull before Black Friday. We wanted to reduce the slow days by getting creative.”