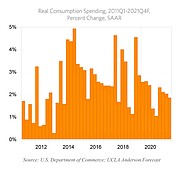 On Dec. 4, the influential UCLA Anderson School of Management raised its 2020 forecast for the U.S. and California economies from 1 percent real growth to 1.7 percent due to low unemployment and high consumer confidence and spending.

David Shulman, an author of and the senior economist for the UCLA Anderson Forecast, said the forecast uptick represents a break from its forecast from the 2019 third quarter. In September, he wrote an essay entitled “The Year of Living Dangerously” in which he predicted an economic slowdown. “[It’s] not quite a recession but pretty close,” Shulman wrote then.

This was bolstered by numbers from the National Retail Federation,which had overestimated Black Friday Weekend spending last year but will likely exceed its forecast for this year.

The change in UCLA’s outlook came as no surprise to economy watcher Ken Wengrod, president and co-founder of the Los Angeles–headquartered lender FTC Commercial Corp. He also serves on U.S. Commerce Department advisory groups including the Trade Finance Advisory Council.

“The U.S. economy is very vibrant, especially compared to the rest of the world,” Wengrod said. “There’s a lot of stability. I think that the U.S. economy will remain strong for at least the next 12 months.”

Wengrod said that the strong labor markets are resulting in strong consumer spending, which is great news for retailers. “People have money to spend and are looking to spend it for the right product. But they are spending it more wisely. If you have the right merchandise, there is a demand for your product,” he said.

But not all economists believe that consumer spending can support the economy for a sustained period.

In a Dec. 4 column for Bloomberg, economist Karl W. Smith argued that investment in housing and business has been slowing. Consumer spending has been a moderating force in the economic slowdown, but consumers can’t spend their way out of an economic slowdown.

“Consumer spending, like overall GDP, peaked in mid-2018 and has been declining ever since. The decline has been shallower than that of business investment, so consumer spending has exerted a moderating force on overall growth,” Smith wrote.” But the trajectory is still downward, and it is nearing levels that prevailed in 2016 and 2017.” Smith serves as vice president for federal policy at the Washington, D.C.–headquartered Tax Foundation.

UCLA Anderson School of Management’s forecast director, Jerry Nickelsburg, agreed with Smith that business investment has been softening and that consumer spending has been supporting the economy. He forecasted that it would continue to support the economy.

In the recently released forecast, Nickelsburg also made predictions for the California economy. The state’s economy has been growing slightly faster than the national economy. If the U.S. economy is forecasted to grow 1.7 percent in the upcoming year, California probably will grow in the mid 2 percents in 2020, he said.

In his forecast, entitled “California Enters the Next Decade with Full Employment and Slowing Growth,” Nickelsburg writes that unemployment rates are at historic lows. They are under 3 percent. In this situation, slow growth won’t hurt the California economy. ”There is faster growth when businesses draw on a large pool of unemployed workers. When people are working, we have to grow slower. That is a good thing,” he said.