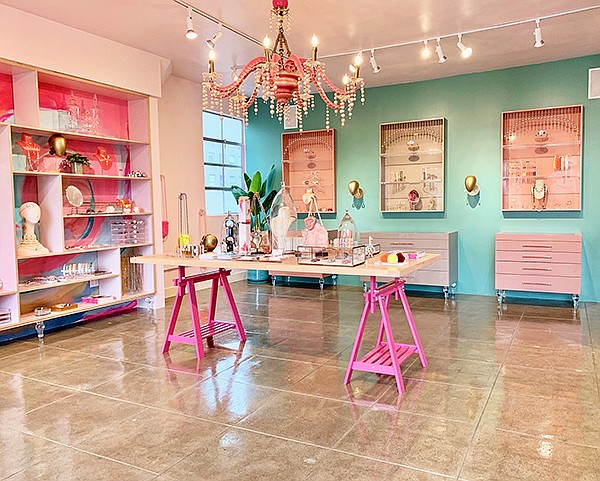 After a four-year hiatus from running a bricks-and-mortar boutique on Los Angeles’ Melrose Avenue, designer Tarina Tarantino has opened a self-named Tarina Tarantino boutique in downtown Los Angeles. The business is housed in The Sparkle Factory building, which is more than 100 years old and located in the fashion district. She renovated the 26,600-square-foot building with her husband and business partner, Alfonso Campos.

Located at 910 S. Broadway, across the street from the Ace Hotel, The Sparkle Factory will house creative offices, street-level retail, a basement bar and, on the seventh floor of the building, the Tarina Tarantino boutique. The boutique officially opened Nov. 23, offering Tarantino’s colorful collections, as well as art, beauty and gift items from third-party brands and, eventually, fashion.

“It’s destination retail,” said Tarantino, who cuts an idiosyncratic figure with her mane of pink hair. “I want people to have an experience when they come up here.” She also hopes to produce events for designers and make the space available to be rented out for such gatherings as birthday celebrations.

The 1,000-square-foot shop formerly served as her brand’s showroom. It features handpainted walls, concrete-glitter floors, and a chandelier that features Tarantino’s jewelry and branches reminiscent of octopus tentacles. Tarantino designed the chandelier with Philadelphia artist Adam Wallacavage. Fixtures that appear inside the boutique were designed by Campos.

The space also features a collage that includes pictures of her retail inspirations such as Barbara Hulanicki, an influential retailer during the 1960s Swinging London period in England, as well as Elio Fiorucci, the founder of the Fiorucci fashion label and a creator of retail destinations.

She and Campos acquired the building in 2007, but the entrepreneurs had a lot of work ahead of them. For more than six decades, 910 S. Broadway housed a number of apparel factories. She worked with downtown Los Angeles architectural firm Omgivning to refurbish the building. Tarantino said that it took years to refurbish the building from being a factory space to being one for shops and creative office spaces.

Since it had been zoned as commercial space, she did not have to petition the city of Los Angeles to rezone the building. She declined to state how much she paid for the building and how much it took to remodel it. The building is 60 percent leased. Tenants include design offices for accessories brand Incipio as well as Mira, an augmented-reality company.

The next month, the Ace Hotel opened down Broadway. In later years, the Theory, Mykita and BNKR brands moved to the corner of Broadway and Ninth. Up the street, flagships for Vans and Apple are scheduled to open, as is a Paul Smith boutique and Ganni, a Danish brand.

Tarantino does not feel bad about not being part of the first wave of retailers on her street. “The timing is perfect. I did a pop-up on [The Sparkle Factory’s] street level in 2016. It was too early. There was no foot traffic. Now it is a different story,” she said. “There is organic foot traffic. There are enough stores on the street for people to feel like they are having a proper shopping experience.”

Unveiled in 1914, the building was the backdrop to a lot of downtown Los Angeles history. It gained cachet as the site where portions of the 1923 silent Harold Lloyd comedy “Safety Last” was filmed. It also was home to the Western Costume Company, which continues to serve as a major Hollywood costumer to film and television productions.

In 2010, enigmatic and popular street artist Banksy made a mural on the side of the building, which formerly faced an open parking lot. Now it faces a walkway across from the Broadway Palace Apartments. Tarantino and Campos covered it with Plexiglas to preserve it, and it continues to be an attraction, with Banksy fans regularly dropping by to take photos. Tarantino forecasted that there would be a lot more shoppers.

“As far as Los Angeles’ retail scene, [downtown Los Angeles] is still new,” Tarantino said. “We know that we have to get creative for customers to come to experience our stores, and that makes it more fun. Downtown Los Angeles is emerging as an exciting and vibrant community.”