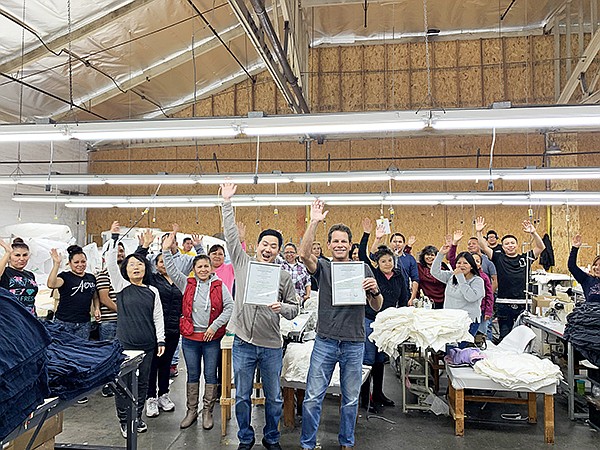 Sustainable design is increasingly important in California, and one factory said it has achieved a gold standard in sustainability. UStrive, based in Los Angeles, was certified by the Global Organic Textile Standard last month.

Scott Wilson, president of UStrive, described it as an arduous process. To be certified by GOTS, nothing about a company’s production practices and supply-chain sourcing could be left to question.

“It took eight months of training, auditing and reinventing how we make clothing. This was a paper-trail nightmare. You are asking four people to sign off on every document,” he said. He thought there had to be a better way to track the supply chain when seeking GOTS certification.

Wilson, a veteran manufacturing executive got involved in creating UStrive because he wanted to know what was needed to make a 100 percent organic shirt. The manufacturing of organic shirts is not much different than the process at traditional factories, which have been critiqued for polluting. Wilson asked his peers if they wanted to build an organic factory.

“This was a paper-trail nightmare,” Wilson said. “You are asking four people to sign off on every document. The first group of people were skeptical. They said, ‘Give us an order, we’ll think about it.’ That’s the way the industry works. They react to orders.”

He also encountered a lot of people who just didn’t want to deal with the bureaucracy required to be certified organic, but, in 2018, he met manufacturers with similar goals. The group formed UStrive. It is the vertical integration of Tour Imageand three other companies, Jin Clothing, Care-Tex Industries and S&B Printing and Embroidery, all of which have deep roots in the local apparel industry.

Tour Image is a 22-year-old sales and design-development company, while Jin is a private-label apparel manufacturer that is more than 30 years old. Care-Tex Industries is a full-service dye-and-finishing facility specializing in GOTS-certified dyes and finishes that rely on non-pollutive chemicals including salt, vinegar and baking soda. S&B specializes in nontoxic, water-based printing and in-house digitizing.

UStrive developed a technology solution to ease the process of making organic clothing. It is scheduled to release in the first quarter of 2020 a tracking platform that will help other companies get involved in the sustainability game. The program is called UTrack, a cloud-based platform that will help track and verify where a brand sources its materials, where a garment was made and the types of chemicals used in making the garment.

David Dea, a technology executive and UStrive partner, directed the development of UTrack and worked with GOTS consultant Ely Battalen to confirm the GOTS guidelines when an organization is considering a company for certification.

UTrack monitors an item’s completion date and creates a unique URL that shows when each step has been completed. The program also has the capability of including this information within a QR code that a brand can add to its hangtags so it can provide transparency on the garment’s journey from field to store.

Dea said that he took eight months to customize it to track GOTS information. He aimed to make UTrack user-friendly by incorporating interfaces that are similar to social media. Like social media, people using the system can receive live updates when colleagues work on the platform. People also can collaborate on the system in real time. Drawing tools and tech packs are connected within the system. There’s also a single searchable library where flat sketches, technical drawings and product images can be placed.

UTrack was built to be shared, Wilson and Dea said. Wilson said that he hopes it will inspire other companies to give a rigorous audit to their sustainability plan. “But the tracking program can be used by anybody,” Wilson said.

The company also will not ship product in plastic poly bags; instead, it will use paper bags to ship products. UStrive has worked with consultant Derek Sabori, former vice president of sustainability at Volcom, the action-sports brand headquartered in Costa Mesa, Calif. He currently works as a speaker and consultant on sustainability issues, particularly cleaning up the apparel industry’s reliance on poly-bag packaging.

“GOTS-certified factories that manufacture in the U.S. are quite rare, which is why I am especially excited to see manufacturers like UStrive taking a position of leadership and obtaining the certification,” he said. “Not many clothing certifications cover the manufacturing process from raw materials all the way to the finished product like GOTS does.”