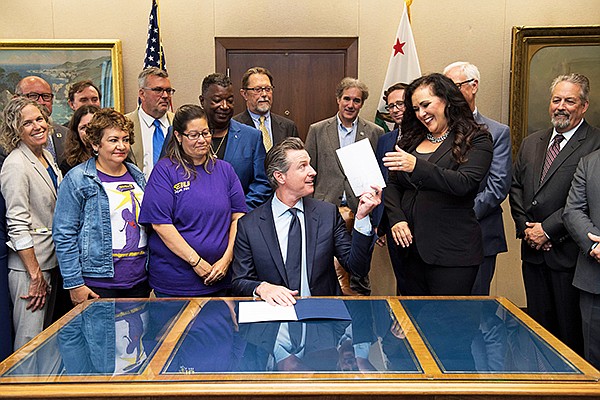 A new year means new California workplace laws in which employers must become well versed. For 2020, Gov. Gavin Newsom has signed into law a number of bills that protect workers’ rights and, also, redefine the role of employees. In 2020, apparel-industry executives and company owners must be up to speed regarding new laws and amendments to ensure a workplace environment conducive to a successful business.

Most importantly, according to Aaron Renfro, attorney and shareholder at Newport Beach, Calif., law firm Call & Jensen, employers should not only review the details of these new laws but also retain counsel to ensure companies are aligned with new legislation.

“There are certainly increased burdens on employers in terms of liability and regulation, so it’s very important that apparel companies have the audits of their current practices and compare them to new laws to make sure they are in compliance,” he said. “I recommend speaking to a lawyer if they are smart, they have their own in-house counsel and should perform this audit.”

While certain laws might be simple to follow and require only small changes within a business, others could force employers to overhaul their practices.

“It could involve redoing handbooks or an audit of the service providers,” Renfro said.

Moving into 2020, apparel-industry businesses in California should note the passage and implementation of the following legislation.

Signed by Newsom in September, the Employment Status Law amends Section 3351 of and adds Section 2750.3 to the state’s labor code, in addition to amending sections 606.5 and 621 of the Unemployment Insurance Code by considering contractors as employees, unless they meet the criteria of a three-factor—or ABC test—established in 2018 through the California Supreme Court decision regarding Dynamex v. Superior Court. Scheduled to be implemented Jan. 1, the law allows those who were formerly considered contractors and excluded from certain benefits, such as certain unemployment funds or healthcare, to access these resources. On the other hand, employers might reconsider the status of their employees or forego working with California-based contract workers.

“Part of what the legislature did was to codify and put into statute form what the California Supreme Court determined to be a test,” Renfro said. “It has come to be known as the ABC test. Unless a statutory exemption applies, then the burden is on the hirer or employer to demonstrate that the employee or contractor is, in fact, a nonemployee or a contractor.”

To fulfill the guidelines of the ABC test and be considered an independent contractor, workers must remain free from the control and direction of the business for which they work, which should be outlined in their contracts. The work performed by these professionals must include tasks that are outside the normal everyday business of the hiring entity. Finally, workers must be “customarily engaged” in the type of trade that is connected to the work they perform for the company with whom they are contracted.

Expanding the time frame that an employee has to file a discrimination charge with the Department of Fair Employment and Housing, AB 9 was signed by Newsom on Oct. 10 and will be implemented Jan 1. Originally affording a one-year time line to employees who believe they have been harassed or discriminated against, the new law will extend this limit to three years.

On Oct. 10, Newsom approved an addition of Section 12953 to the government code and Section 432.6 to the labor code, thereby prohibiting employers from requiring applicants from waiving any of their rights outlined by the Fair Employment and Housing Act. According to AB 51, employers are also prohibited from engaging in retaliation, discrimination, threatening or terminating an applicant from the employment-application process if the candidate refuses to consent to a waiver of their rights.

Beginning Jan. 1, companies are forbidden to include in settlements with employees policies that prevent the rehire of persons who have accepted legal settlements against their employers. Signed by Newsom on Oct. 12, the bill also makes provisions for extraordinary circumstances that would permit employers to terminate or rely on a policy of not rehiring certain employees. These occurrences, judged on a case-by-case basis, include employees who have engaged in sexual harassment or sexual assault. Additionally, employers will not be forced to rehire a former employee if the reasons for bypassing the candidate are neither retaliatory nor discriminatory.

AB 1513 originally was implemented in January 2016 to establish non-productive time compensation guidelines for workers who are reimbursed according to a piece-rate amount. For 2020, a new amendment has been added to Labor Code section 226.2, requiring the compensation of rest periods. This is separate from piece-rate compensation and, according to California’s Department of Industrial Relations, must be determined by a figure that is the higher of either “an average hourly rate determined by dividing the total compensation for the workweek, exclusive of compensation for rest and recovery periods and any premium compensation for overtime, by the total hours worked during the workweek, exclusive of rest and recovery periods,” or the appropriate minimum wage.

“Under Labor Code section 2673.1, garment workers who are not paid for all hours worked may file wage claims against the contractor who hired them, as well as the manufacturers whose garments they produced,” according to the California Department of Industrial Relations.

Within this legislation, which was signed into law by Newsom on June 27 to be implemented July 1, paid family leave for new parents has been increased from six to eight weeks. This time afforded for parents to bond with newborn or newly adopted children can be taken in addition to the six weeks of post-childbirth recovery afforded under the state’s disability-insurance program. This time frame has also been extended to employees who are caring for an ill family member.

Following its approval by Newsom on July 3, SB 188 amended Section 212.1 of the Education Code and Section 12926 of the Government Code. While FEHA protects employees from discrimination-based hiring, promotion and termination based on race, religious beliefs and sex, or perceptions stemming from these factors, SB 188 provides further protections. Expanding the definition of race, the law prohibits employers from discriminating against employees or candidates based on hair texture and styles such as braids, locks and twists.

Amending the existing law that requires employers to pay wages to professionals hired to work on photo shoots upon completion of the project, SB 671 now allows employers to adhere to their regular payment schedule.

“[In the past,] if you hired a contractor for a print shoot then you had to pay at the termination of the project regardless of the company’s practices,” Renfro explained. “Now you can pay the employees or contractors on your next pay day.”

By Jan. 1, 2021, and every two years thereafter, employers with five or more employees will be required to offer two hours of classroom or interactive sexual-harassment training to supervisors within six months of assuming a management-level role. In addition to the education of supervisors, the bill, which was signed on Aug. 15 by Newsom, requires non-supervisory employees to engage in one hour of sexual-harassment training within six months of hire. Employers who have mandated training for employees after Jan. 1, 2019, are not required to provide additional training by the Jan. 1, 2020 deadline but must do so after two years have passed.

Though the law regulating minimum wage increases was implemented in January 2017, the scale of increases in wages will still affect companies in 2020. As of Jan. 1, the California minimum wage for employers with 25 employees or fewer will increase from $11 to $12 per hour. Those businesses with 26 employees or more must adhere to an increase from $12 to $13 per hour.

While many of the new laws will take effect Jan. 1, it is important to note that the date of implementation could vary by location, according to city or county.

The increase is the latest change to Califonia’s minimum wage, as the rate each year with an ultimate goal of implementing a statewide figure of $15 per hour by 2023.