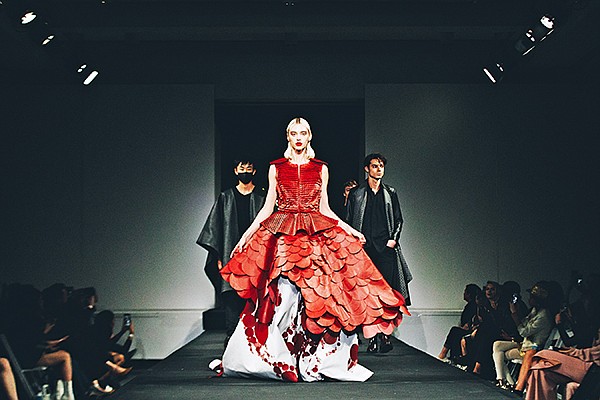 Vegan Fashion Week Launches in L.A. With Fashion and Activism 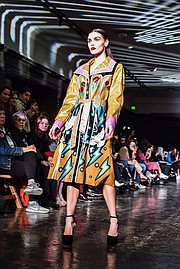 The very first Vegan Fashion Week kicked off in Los Angeles on Feb. 1 with a private event at the Natural History Museum and then two days of public events at the California Market Center.

At the CMC, there was Vegan World during the day and a fashion show the second night of the three-day happening.

“We are such a grassroots movement,” said Emmanuella Rienda, the organizer of Vegan Fashion Week. “We managed to successfully create a vision for the community to keep moving together. There is a strong connection that arose from the event through which we can collaborate with the attendees and exhibitors.”

“My parents were fashion designers, so I grew up in Paris in the fashion world,” said Chloe Trujillo, now based in Los Angeles. “The way manufacturers make fake leather now is scientific with materials such as pineapple and mushrooms—it’s incredible. It was so inspiring seeing the other designers and their creations. You see that you can make anything in this way.”

Fashion-show attendees also included celebrities who have supported animal-rights initiatives, including musician Moby and actors Mena Suvari and Harley Quinn Smith. While the event began with a Los Angeles launch, Moby noted that many social trends launched in Los Angeles have expanded into globally accepted norms.

“L.A. has become the world center for vegan food, vegan apparel and veganism in general,” Moby said. “If you look at the last hundred years, how many social movements and world-changing movements have come from Los Angeles? This is the incubator for trends that spread into—and change—the rest of the world.”

As Vegan Fashion Week came to an end, Rienda looked forward to the future of her new event brand. “The goal of Vegan Fashion Week was that brands, at any stage of vegan fashion or sustainability, can come together for discussion and extend the idea to come up with solutions that are good for people, the environment and animals,” she said.

The first installment of Vegan Fashion Week closed with a private fund-raising event Feb. 4. According to Rienda, plans are now being made to hold a second edition of the event in September in New York or Paris.