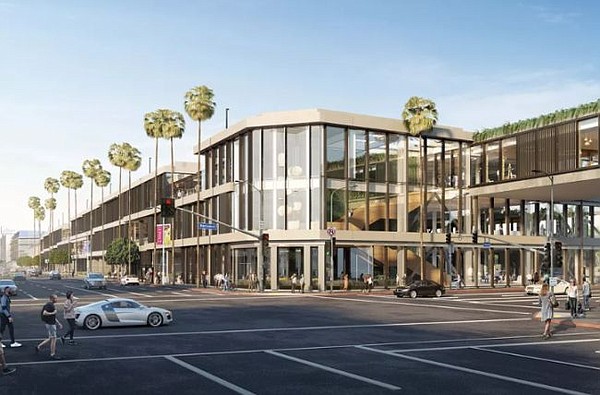 Rendering of One Westside. Image courtesy of Hudson Pacific

Google has developed a campus at the Frank Gehry-designed Binocular Building in Los Angeles’ Venice neighborhood. It also built offices at a former airplane hangar in Playa Vista, which is a short drive from LAX. Now the tech giant is going to take over a mall.

On Jan. 8, it was announced that Google leased 584,000 square feet, almost the entirety, of the once prominent Westside Pavilion mall in West Los Angeles. The mall will be renamed One Westside, and transformed into a creative-office campus for Google, according to a statement from the property owners Macerich and Hudson Pacific Properties.

Architecture firm Gensler will redevelop the mall. The new look will include a garden deck. There also will be a bridge to the popular Landmark Theatre, which often screens independent movies, and the Westside Tavern, where diners drink microbrews and California wines. These hangouts will continue doing business at the edge of the Westside Pavilion site, said Victor Coleman, Hudson’s chairman and chief executive officer.

“We are thrilled to expand our relationship with Google, and are proud to support this significant phase of their growth. Google’s selection of One Westside demonstrates the strength of the Los Angeles tech and media industries, and exemplifies the type of creative office space that is in demand from large tech and media tenants. One Westside also demonstrates Hudson Pacific’s ability to identify and swiftly execute on large-scale and complex investment and adaptive-reuse opportunities to meet that growing demand,” Coleman said in a prepared statement.

Macerich and Hudson formed a partnership in 2018 to redevelop declining malls. Westside Pavilion was one of the stars of the 1980s mall scene. The Aeropostale brand opened its first store at the mall in 1987.