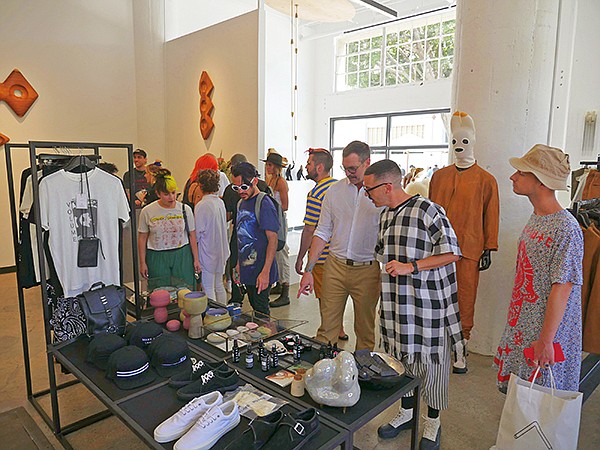 Opening day at Cota by Skingraft on July 14

Riding the Wave of Experiential Retail, Skingraft Grows Up and Free Market Expands

The Skingraft brand was one of the pioneers of high-end fashion retail in downtown Los Angeles, but, after a decade of running the brand’s boutique, co-founders Chris and Jonny Cota closed their shop in March. Despite the decision to close Skingraft’s doors, the Cota brothers did not lose confidence in bricks-and-mortar business or in the downtown area, where they decided to open a new retail concept called Cota by Skingraft.

Located at the Row DTLA campus of boutique retail, restaurants and creative office spaces near downtown’s Arts District, Cota by Skingraft will rely heavily on experiential retail, Chris Cota said. This sort of retail is focused on retailers developing experiences for consumers, which range from pop-ups and trunk shows to producing galleries and parties.

Concept retail is growing more popular in all categories of selling products, according to Chris Cota.

“The only way for traditional retail to work is it has to be more experiential,” he said. “We see this space not only as a store. It’s an events space. It’s a gallery, a showroom and a gathering spot. [Retail] has to go beyond selling racks of clothing. It’s about selling consumers on a concept.”

The 2,000-square-foot Cota by Skingraft space will focus on offering a revolving slate of independent fashion brands such as Bel Kazan, Blackfist, No.Liste and Blamo Clothing. There will also be a gallery section where a new artist will be featured every six to eight weeks.

When a new creative partner enters the space, Cota by Skin­graft will produce an event, which will feature performance art as well as DJs playing underground music. Eventually, Cota by Skingraft vendors are slated to give public talks about their brands at the shop, while Skingraft will maintain a permanent space of 500 square feet in the store. Retail price points will range from $35 for a cap to $20,000 for art. Core price points will range from $200 to $400.

“This is Skingraft growing up,” Chris Cota said. “This way we can support other artists and play off them in a more interesting way.”

A destination for retail consumers

Multi-brand retail with an experiential edge is nothing new in Los Angeles. The influential Fred Segal boutique compounds started pioneering it in the 1960s and 1970s. Now, a refreshed concept of experiential retail is gaining traction across categories in retail, such as Macy’s roll out of 36 experiential-focused shop-in-shops it refers to as “Story.”

In May, Raan Parton, a co-founder of the Los Angeles–headquartered Apolis brand, opened the experiential retail–influenced Free Market in Denver within a 12,000-square-foot space located in the Lower Downtown neighborhood. The space launched to offer fashions in sections Parton refers to as “footprints” as well as pop-up experiences from new brands.

“There’s a lot of pressure on retailers to do something more with their four walls,” Parton said. They thought there was an opening in the market for a new store of development.

Free Market opened in Denver because an opportunity for a space opened up, but Parton feels that the idea of creating an experience for consumers has legs. In early 2020, he’s going to open a 2,800-square-foot space in the Runway Playa Vista Center, which is locateda short drive away from Los Angeles International Airport.

Experiential retail has its roots in a reaction against mass-marketed products, said Shaheen Sadeghi, chief executive officer of Costa Mesa, Calif.–based The Lab Holdings, which developed and ran specialty retail centers The Lab and The Camp. Looking for alternatives to mass-marketed goods took on a certain urgency for him when he served as president of the surfwear brand Quiksilver in 1990.

Department stores were consolidating and some were going out of business, leaving surf brands slighted by losing business from these partners. Sadeghi took a risk and decided to develop a solution.

The Lab, which opened in 1993, focused on community areas where people could hang out, as well as having smaller, nontraditional retailers. The Camp opened in 2002 with a focus on sustainable goods and organic foods. Both focus on localization, personalization and not homogenization, Sadeghi said. The current era is a boom time for small, crafts-focused businesses familiar to Lab Holdings.

“A lot of people are unhappy with how Amazon has given competition to department stores,” Sadeghi said. “But it has also opened up gates for small businesses and handcrafted brands to flourish.”

Sadeghi forecasts that experiential retail is not a passing trend, with the spirit of discovery keeping it alive. At his properties, leases are kept relatively short at two-to-five-year intervals, allowing new retailers to open, offering a refreshed look. Lifestyle malls, which have grown in popularity, also prioritize keeping their mix of retailers and tenants fresh.

The mall market continues to be troubled, said Paco Underhill, the founder of consultants Envirosell Inc., and the author of books such as “Why We Buy: The Science of Shopping.” Experiential retail is no panacea.