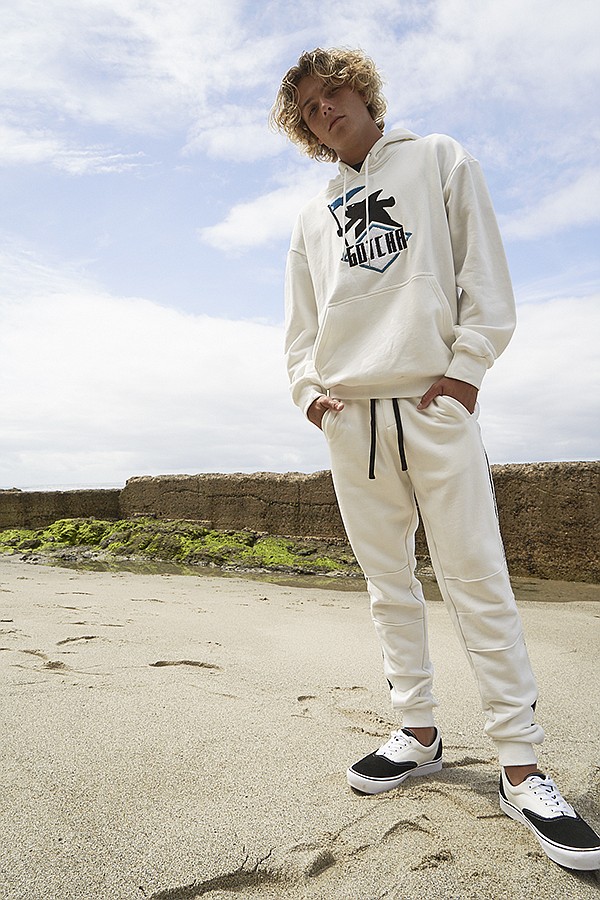 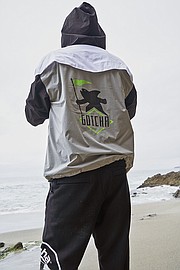 The downtown Los Angeles-headquartered Yoo released a Fall ’19 Gotcha line for men, in collaboration on July 15 with Perry Ellis International, Inc. which owns the trademarks for the surf brand that was highly influential in the late 1970s through the 1990s. Yoo designs the self-named Hyden Yoo brand and streetwear influenced line Standard Issue. The Fall ’19 Gotcha line is currently sold on his direct-to-consumer channels, hydenyoo.com, and he plans to wholesale the Fall ’19 line this year.

Gotcha was famous for being one of the innovators in the action-sports fashion scene. In a market that was once dominated by the corduroy shorts of the OP brand in the late 1970s, Gotcha brought neon colors, irreverent prints and unique silhouettes to surf.

Perry Ellis International Inc. wrapped up a deal to acquire the brand’s logos and intellectual property for $12 million in 2006. Since then, there have been various attempts to bring the brand back. The Z-Supply company made a Gotcha women’s line for Urban Outfitters in 2017. 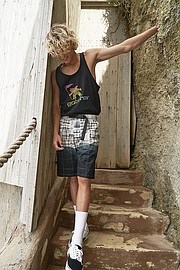 A license for men’s Gotcha looks was managed by Imperial Apparel Group, which still produces a Gotcha women’s outerwear line. Other manufacturers making Gotcha clothes include Elan Polo International Inc., which manufactures men’s and boy’s Gotcha footwear, which are distributed in the U.S. and Canada. There are also manufacturers making Gotcha for Latin American markets, according to a Perry Ellis statement. Gotcha has a track record, and Yoo said that he wanted to put his own mark on the pioneering brand.

“I wanted to differentiate from prior collections for this relaunch,” Yoo said. “Our first capsule is monochromatic in color and features an updated silhouette.”

There are 25 different styles in the new Gotcha line. Retail price points range from $24 to $108. Looks include boardshorts, tees and hoodies, all bearing the once iconic Fishman logo and the Gotcha brand name. There are also familiar silhouettes for surf, Yoo said. “This line will still keep its surf and skate DNA, but there will also be a streetwear vibe,” Yoo said. 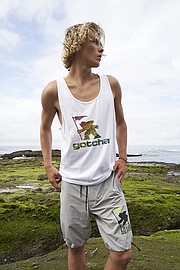 Developing new styles for a veteran name is an important step in bringing a brand to a contemporary market, said Adam Derry, founder of the brand-development agency ADBD and a partner in the accessories brand Bandolier.

“You can’t rely on the name—you have to make relevant products for today. That’s where the opportunity is,” Derry said. “The people who loved brands in 1981 are the parents and the grandparents of today’s generation of new consumers. This new generation has to see themselves in the brand, while the brand designers have to find a way to be an authentic voice.”

Finding a niche in the action-sports market will take some work, said action-sports veteran and Gotcha co-founder Joel Cooper. He left the brand in 1997 and currently serves as chief executive officer of Lost International.

“The biggest challenge for brands now is a limited amount of doors,” Cooper said. “A lot of other companies own their retail. That’s a big advantage.”

Cooper started Gotcha with champion surfer Michael Tomson in South Africa in 1978, but they moved operations to Laguna Beach, Calif., in 1979, just when major surf brands such as Quik­silver were starting out.

Cooper described Tomson as a fashion visionary. While popular surf brands of the time focused on making boardshorts and tees, Tomson wanted to design complete collections of clothing. While other brands focused on clothing with earth-tone colors, Gotcha released styles such as clamdigger pants in bright, neon colors.

The unique styles captured the imagination of surfers and youth seeking beach-culture clothes. A team of talented executives and designers worked with Gotcha. Shawn Stussy, founder of the influential Stüssy brand, designed a year for Gotcha, Cooper said. Paul Naude, former president of the Americas division of Billabong, worked for 12 years at Gotcha. He ended his tenure as marketing president before joining Billabong. He later founded the Vissla brand. Another Gotcha alum was Shaheen Sadeghi, who worked as an executive vice president of merchandise. He later developed the influential specialty centers The Lab and The Camp in Costa Mesa, Calif.

Gotcha’s business crested in the early 1990s when sales for men’s and boy’s clothing in the U.S. had revenues of more than $150 million. Cooper said that the brand was a victim of its own success. “We over distributed. By the late ’90s, we weren’t the flavor of the month,” he explained.

An investment group led by entrepreneur Marvin Winkler acquired a majority interest in Gotcha for an undisclosed price in 1997. Cooper and Tomson left the company after the deal closed.

Cooper forecast that the timing is right to release a new Gotcha line. “Everyone is interested in old brands,” Cooper said. “There is so much great history in Gotcha. If someone came along and did it right, they could make it successful.