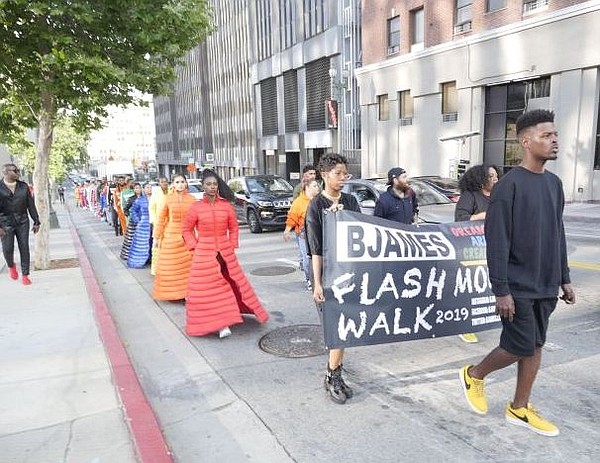 B James Takes It To The Streets

Companies always talk about wanting to take their products directly to the people. Designer Brandon D James took his 2019 styles of his B James label literally to the streets.

On June 7, he produced a guerrilla runway event, which he called a Flash Mob Walk, in downtown Los Angeles. In this Flash Mob walk, 33 models walked up downtown’s Spring Street, then made their way through 2nd Street and down Figueroa Street, all in an effort to show B James’ take on outerwear. The styles ranged from full-length puffer jacket dresses to track suits and leather jackets.

The fashion procession turned heads and seemed to get thumbs up from the average people and fashion business people who happened to be on the scene. Designer Jordana Howard of Mike's Deli Brand saw the procession passing by downtown Los Angeles landmark Grand Central Market. “It was very cool, like performance art,” she said. “Just seeing everyone lined up dressed in a primary color palette was striking.”

On June 8, B James produced another Flash Mob Walk in the Hollywood & Highland area of Hollywood. 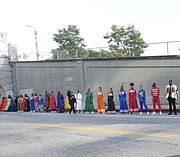