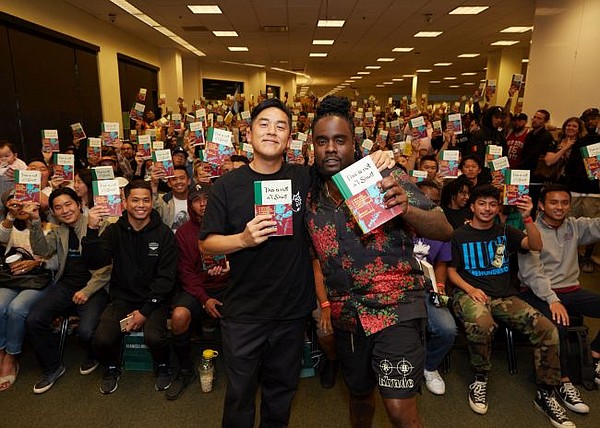 Bobby Hundreds On Building A Brand, Mistakes & The Power of Blogging in This Is Not a T-Shirt

Bobby Kim, better known to the fashion world as Bobby Hundreds, is in the midst of a flurry of interviews for his first book This Is Not a T-Shirt, which was released by literary publisher Farrar Strauss & Giroux this week. On June 25, Bobby presided over a book event at the Barnes & Noble bookstore at The Grove in Los Angeles. In front of an audience of more than 250, he was interviewed by rapper Wale. Later, he signed fans’ books until the book store’s closing time at 11 p.m.

The 326 page book (no pictures, he said!) covers the rise, the stumbles, the colorful people and of course, the styles of the Los Angeles-headquartered streetwear brand The Hundreds. He founded the brand with Ben Shenassafar in July 2003.

Bobby took pains to explain that his new tome was not a business book. “It’s a response to a business book,” he said. “This book is riddled with failure stories. I stumbled a lot and learned. I’ve also learned the more honest real and transparent you are, the more people care about you as someone who worked hard to get where they are.” He described his failures as opening too many stores, overexposing the brand, as well as rolling with the punches of the ups and many downs of working in fashion.

He counts as one of his biggest successes as building a community around the brand. “I think that the greatest problem in the world is a disconnect,” he said. “People are feeling very isolated and alone. We’ve been distracted and mislead by the Internet. People think that it is establishing more connections, when it is misfiring. I want to do everything we can to bring people together. I can do that at stores, through book writing. We throw a lot of concert and shows. All of those are opportunities to bring people together.”

Some of the success of The Hundreds had to do with being at the right place at the right time. The brand started business just as demand for streetwear fashion was gathering a great momentum. Bobby also worked hard to invite people to build a community around the brand. He built community through a blog, which he continues to contribute. It can be found at the brand’s website thehundreds.com. The brand currently runs an editorial office of two people. It’s not a profit center. But it’s developed legions of people who follow the brand to check up on the brand’s thoughts on the culture.

“It was the key to building our brand,” he said. Since the beginning of The Hundreds, Bobby wrote about the streetwear scene, new rock bands and hip hop MCs, artists, food, activism, and the brand’s relationship with mascot Adam Bomb. The anxious-faced bomb is one of the characters that Bobby sketched and placed on tees, caps and almost everywhere. The popularity of the character skyrocketed. But The Hundreds has scaled back the mascot’s presence. Bobby and others feared that the cartoon got in the way of the brand being taken seriously.

The story of The Hundreds is not just about blogging, sketching and making statements. It’s also about running an enterprise. The Hundreds brand employs about 50 people. Bobby and Shenassafar also own other ventures such as the Mixed Media Productions screenprinting facility and restaurant TikiFish, with a location in West Hollywood and West Los Angeles. They also own The Friend bar in Los Angeles’ Silver Lake section.