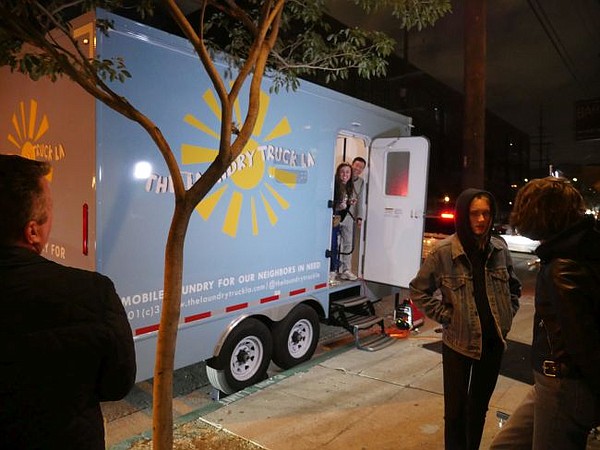 Jodie Dolan is a fashion success. Her self-named Dolan brand has been sold at Nordstrom, Barney’s and Anthropologie.

But when it came to dealing with one of the biggest issues in her town, she felt like she had fallen short.

“We see hundreds of homeless people everyday. But what do we do?” Dolan asked.

She wanted to take more of an activist’s role. In 2017, she started working with The Shower of Hope. The group offers the homeless a safe place to take showers. The showers are built into the organization’s mobile trailers which are parked in different locales around Los Angeles, such as MacArthur Park.

A shower was only one step, Dolan said. People also need clean clothes. What good is a shower if one has to get back into filthy clothing? Dolan worked with The Shower of Hope to brainstorm how to deliver laundry services to the homeless. It was The Laundry Truck LA. It hit the streets of Los Angeles in January. The free mobile laundry offers five washer and dryer sets in a custom made vehicle made by the Rich Specialty Trailers company. The Laundry Truck LA works in conjunction with The Shower of Hope.

But Dolan is working on raising a remaining $60,000 to reach a $150,000 goal to fund the first year of operations for the laundry truck. Dolan said that one of her aims is to get the Los Angeles fashion business involved in Laundry Truck LA. A number of fashion businesses, such as Trina Turk and denim brand AG, helped underwrite the cost of building the first truck. The venture also received a grant from bleach and consumer products company Clorox.

The Dolan brand also will offer an ongoing fundraiser for The Laundry Truck. Some proceeds of its sales from its direct to consumer channel as well as its wholesale business will help fund the venture.

Washers and dryers at The Laundry Truck LA

The Laundry Truck LA tees on display at Zinc event