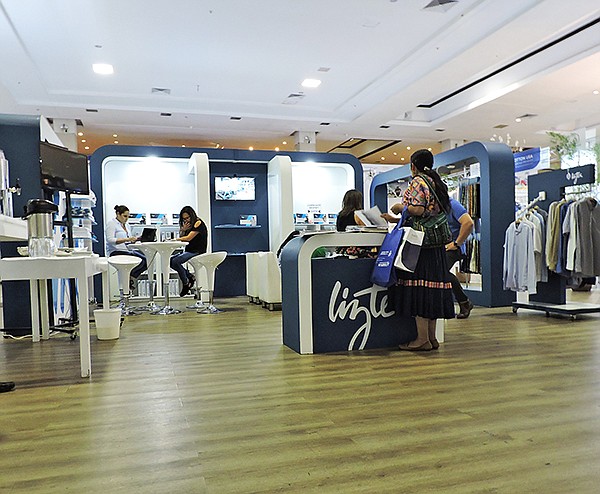 GUATEMALA CITY—As a country that benefits from the Dominican Republic–Central American Free Trade Agreement, Guatemala is preparing to see an increase in business from United States apparel brands that might need to shift sourcing partnerships away from China. With the demand for sustainable sourcing from apparel brands, mills in the region are preparing to meet that need.

According to the U.S. Department of Commerce, Guatemalan clothing exports to the United States are up. For the one-year period ending March 2019, Guatemala exported $1.46 billion in apparel, which was up 9.65 percent over the previous year.

At the 28th annual Apparel Sourcing Show, held May 14–16 at the Grand Tikal Futura Hotel and Convention Center, hot topics of discussion were the escalating United States–China tariff war and greater sustainability options across the supply chain.

Reporting a nearly 11 percent increase in attendees during this year’s Apparel Sourcing Show, organizers said that exhibitors represented a variety of different resources from around the world.

“The mix of exhibitors showcases a fully integrated supply chain,” said Lucía Palacios, executive director of the Apparel Sourcing Show. “This year we had 21 companies that were new. It adds more value to our industry.”

During the event, 34 percent of exhibitors represented textiles; 31 percent exhibited machinery for sublimation, screen-printing and embroidery; 16 percent were in the business of apparel manufacturing and production; 14 percent provided notions and accessories; and 5 percent offered services such as cargo solutions.

“In Guatemala, I now see big companies with new machines and big factories, but before I didn’t think it was possible,” said Marcos Haber of Torcidos Industriales, SA, a thread producer from Mexico who was at the show to see apparel-manufacturing trends. “My opinion regarding Guatemala has changed for the better.”

Trends toward more–ecologically sound apparel sourcing resulted in a bigger presence by Guatemalan and United States–based suppliers of sustainable products and services.

For Ludovic Duran, commercialization manager at Canadian clothing brand Tentree, working with transparent, sustainable manufacturing partners is at the core of his company, which plants 10 trees for every product purchased. The company in Vancouver doesn’t currently have any production partners in Central America, but Duran was interested in simplifying the supply chain, making this region a smart choice. But he had reservations.

“So far, the contacts that I have made here have been great,” he explained. “My concern right now is that they haven’t had a lot of experience with the material we’ll be working with. They’re willing, but they’ll be competing with other countries that have been working with these materials.”

During the show, exhibitors with sustainable offerings were able to accommodate the growing demand for eco-friendly supplies. Karla Mejía, a textile sales executive for Liztex, one of the largest textile manufacturers in Central America, located in Amatitlán, Guatemala, said that she saw a strong trend toward producing fibers from recycled sources.

“We have a machine that you put all the scraps in and it produces the yarn and fabric again,” she said. “Right now, we’re doing post-industrial cutting and sewing. We have other customers with whom we are negotiating post-consumer options,” she added.

By expanding its sourcing options, the company will generate more production opportunities for not only Guatemala but also the entire Central American region.

“We developed the Eco Yarn, which offers upcycled yarn, to reduce carbon-dioxide emissions, water consumption and toxic materials such as pesticides,” he said. “We’re starting to focus on the U.S. and calculating the capacity for Guatemala. We want to grow and are about to make an important investment in this spinning facility.”

“At Buhler, we’re close with our brands, so we can say, ‘Okay, if you really want sustainability, this particular factory here in this hemisphere can do that,’” she said. “We’re making some headway with the brands to define true sustainability. Looking at it from a manufacturer’s point of view, if you want to look at sustainability, look at the whole supply chain.”

Supporting apparel-industry expansion within the Americas and growth in sustainability, Harris mentioned that there are times when progress is made through unlikely partnerships. In addition to responsibly sourcing its fibers, gaining OEKO-TEX certification and adhering to power-saving initiatives in its plants, the Jefferson, Ga.–based Buhler is securing a partnership with an unnamed competitor within the United States to build a better industry.

“We have to look at changing how we do things now. The world is changing around us. It’s time we change with it,” she said. “Our competitors can be our best friends. Instead of saying, ‘We have obstacles,’ we have opportunities.”

While many local Guatemalan apparel leaders were excited about a growing opportunity to increase apparel and textile production, they were also concerned about whether the smaller Central American country could compete with China’s enormous production capacity.

“We have a window of opportunity with the conflict that is going on between China and the U.S. It is going to take a little bit of time because everyone can’t afford to move all of their operations here,” Palacios said. She noted that investments to expand the country’s capacity would be necessary to accommodate demand that could result from the trade war.

For companies hailing from the United States, a major topic of conversation was the shift of apparel-brand relationships away from China while fortifying those within Central America. Mohamed Suliman, regional sales manager for Indian Land, S.C.’s Keer America Corporation—a United States subsidiary of Zhejiang, China’s Keer Group—felt that Guatemala’s quality was a selling point for the apparel industry.

“Guatemala’s textile industry is more high end,” he said. “The quality—whether in fabric or sewing and cutting—is a lot higher than other parts of Asia or even in Honduras or Haiti.”

One exhibitor from China was Wendy Wei, manager of the Shaoxing Bigeng Textile Co., located in Zhejiang. She said the show had been slow at her booth, but many of the attendees who stopped by were locals from Guatemala.

“Right now, customers are getting ideas and will follow up later,” she said. When asked about the trade situation between China and the United States, she recognized potential negative impacts but felt hopeful due to her country’s increased influence around the world.

“We must respect each other,” she said. “The policies may impact business, but China has become stronger.”

A newcomer to the Guatemala show, the Embassy of India in Guatemala had a booth to help forge new relationships between the country and the Central American region. With a new ambassador to Guatemala—Shri B. S. Mubarak—who assumed his post approximately six months ago, India was present to promote Texprocil, the country’s textile-export council.

“We are sharing a database with potential buyers and importers—people who are interested in exploring business partnerships with India,” said Carlos Sosa, marketing executive for the Embassy of India in Guatemala. “The ambassador, who has been here for six months, is very active in all sectors. He wants to increase trade between the region and India.”