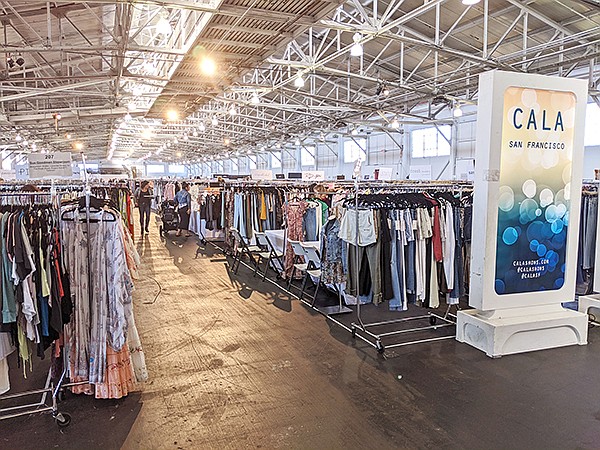 CALA Winds Down Its 2019 Show Schedule With San Francisco Edition

While the November San Francisco edition of the CALA trade show isn’t its final event of the year, it is the final installment in the city where it began, and event organizers are looking to finish 2019 strong as buyers and exhibitors become excited about opportunities that lie ahead in 2020. Hosted Nov. 5–6 at San Francisco’s Fort Mason, the penultimate event of the CALA calendar was held following a June edition that saw record-breaking high temperatures and the launch of a Las Vegas edition of the trade-show brand in August.

Following this installment of CALA, organizers will head to Denver, where they will produce the brand’s final show Nov. 11–12. Despite the shift to a 10 a.m.–7 p.m. schedule for its September edition in San Francisco, CALA organizers decided a return to a 9 a.m.–6 p.m. schedule would benefit attendees following the daylight savings time change.

“It’s been good,” said show owner and President Gerry Murtagh. “The atmosphere is good, and everybody is excited to wrap up the year.”

While summer heat was not a factor, this time of year includes the California fire season, an unpredictable few months when the disasters can prove devastating. As San Franciscans remain cautious about the Kincaide fire, which was contained at 88 percent by press time, CALA show organizer Robert Murtagh said the event was hosted without incident.

“People were worried about the fires, and that has kept some of the buyers from attending, particularly due to the Kincaide fire, but thankfully it hasn’t been too bad,” he said. “We haven’t been affected by power outages or smoke.”

At the booth for the San Francisco–based Lori Markman Showroom, which represents ethically made brands, owner Lori Markman agreed with Murtagh’s assessment regarding the fires, noting that retailers are recovering after a week that left some businesses closed and without power, but quality buyers were still in attendance.

“The fires have had an impact on people. Their businesses were closed last week, and a lot of people didn’t have any power,” she said. “That has made an impact, but we’ve seen some really good stores. Overall, people are being a bit more cautious because we’ve had crazy hot weather and fires—things that don’t promote great retail for fall.”

Representing JVL Los Angeles, a new brand for the showroom, Markman noted that buyers were not investing in too many Immediates but might order smaller items such as fingerless cashmere gloves or small handbags and pouches. Looking toward Spring, she noted the beauty of the space created an atmosphere of happiness among attendees as they looked to place orders for pieces that were available in season-appropriate colors.

In business for 40 years, Markman revealed that the CALA show offers an alternative to larger shows and buying seasons that are difficult to navigate.

“People like coming to this show. It’s convenient for people to shop. The better stores are coming,” she explained.

Show regular Michael Stars also had a booth at this recent CALA edition, where most buyers were looking for Spring goods as they looked toward 2020. Account Executive Claudine Han has worked the wholesale space for four years and saw this as an opportunity for the Hawthorne, Calif., brand to see accounts that don’t travel to larger events.

“Typically, we have our accounts that come to the CALA shows to see the line. With our accounts, a lot of them are coming to see Spring, and if they have seen the line for Spring they are adding onto orders or doing Immediates business,” she said. “It’s a really easy show to come to. A lot of the vendors that you typically wouldn’t see in Los Angeles and New York come here, so we get a great flow of exhibitors and vendors. It’s an easy one-stop shop.”

With accounts from Marin County and San Francisco, Han noted the show was popular with Northern California buyers. In addition to spring colors, she saw a demand for trends that have enjoyed strength over the past few seasons in addition to interest in apparel manufactured using natural fibers.

“They are into the new colors that we have,” she said. “Novelty has been huge with our animal prints, tie-dye is still huge for us, and they are interested in eco-friendly fabrications in natural fibers such as our woven linens and gauze in 100 percent cotton.”