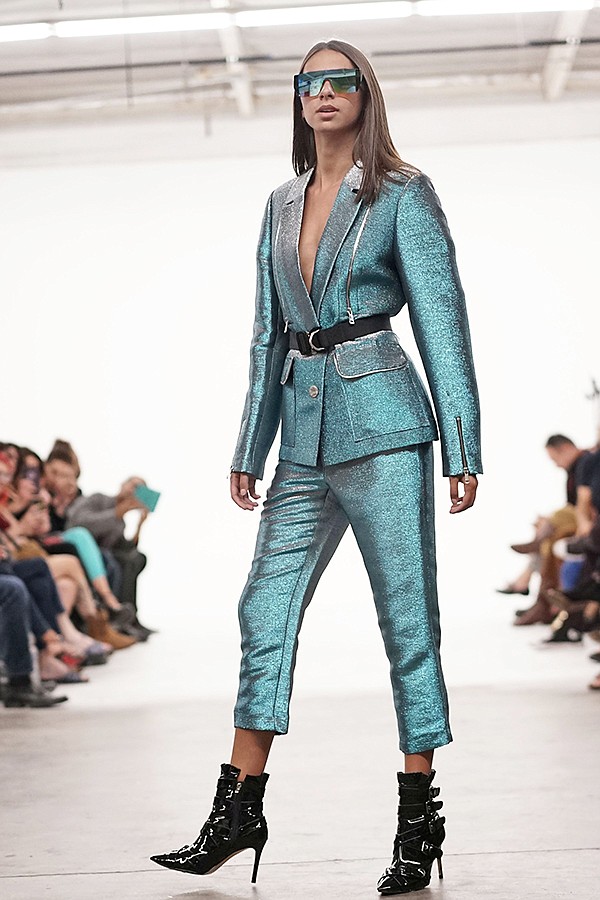 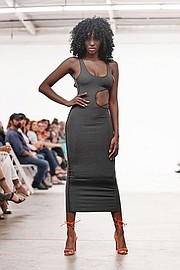 A Wave of Fantasy at FCI Student Show, pt 2 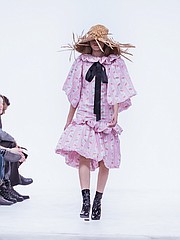 At the Oct. 10 FCI Fashion School student show, there was a wide exploration of fantasy-inspired looks. The event took place at the Phylm Studios event space near downtown Los Angeles and showcased styles of 11 students from the private fashion school, which teaches accelerated courses in fashion design and merchandising.

The show started with five looks designed by Kentaro Kameyama, the winner of “Project Runway”season 16, who also serves as fashion design chair for the FCI faculty. Kameyama said that the looks had been inspired by sleep and the realm of dreams. A couple of his looks featured a headpiece made from pillows. Another look featured pillows as front and back panels of a dress. A cupid figure was printed on the piece’s front pillow.

Karen Yoshida made nine looks that she said were inspired by a possible afterlife. The styles featured loose-fitting white clothes. One of Yoshida’s coats featured large Japanese lettering whose English translation means, “Life goes as fast as an arrow.”

Riley Okamoto showed a few styles inspired by horror movies. Tops featured holes that resembled slashes created by a knife. One of the several looks that he showed included a relatively restrained skirt style featuring a design of red roses.

Simay Belur showed six looks that included pieces to adorn the head, constructed out of materials such as horse hair, fabric and flowers.

Many of FCI’s students grew up overseas, leading them to put together looks that mixed Western styles and Asian traditions.

Nikita Prasad grew up in India and used traditional Indian fabrics in an FCI student show that was produced in May. During the Oct. 10 show, Prasad showed some looks that had some South Asian influences as well as a suit made with black sequins.

FCI student Jane Wu also works as an actor. Her résumé includes Chinese action films and a cameo appearance in the 2016 film “Captain America: Civil War.”For this FCI show, she put together looks for a futuristic secret agent. All of her models wore sunglasses that had a slick science-fiction look. The line was meant to be unisex.

“I wanted to get rid of barriers between men and women,” Wu said of the blazers, big jackets and other styles of her line.

The bodysuit trend took new form during the FCI show. Winona Luk put together styles marked by a white bodysuit and a long-sleeve dress with a plastic panel in the dress’s front.Students also brought their own influences on contemporary dressing.

For Laila Eshan, who was born in Afghanistan, the FCI show was an opportunity to speak to social justice through creating contemporary pieces. Forced into an arranged marriage, Eshan said that part of the mission for her future fashion projects will be to raise funds for girls forced into the same situation.

Wrapping up the show was a guest appearance by Cha Cha, who appeared on “Project Runway” season 16 with Kameyama. Partaking in the theme of the overall show, Cha Cha’s styles featured a fantasy element and items made with pieces that resembled pillows.