Los Angeles’ Melrose Avenue has been a hub for alternative-lifestyle clothing for decades. Approximately 40 years ago, Melrose east of Fairfax Avenue was the go-to place for punk-rock clothing and curated vintage rock ’n’ roll looks that gave Los Angeles a unique style. Decades later, it’s the address for designers who create looks appropriate for adventurous attendees traveling to the Burning Man festival, as well as streetwear styles and other idiosyncratic style tribes.

Jamie Rivadeneira, founder of the JapanLA shops, grew up around Melrose and runs a shop on the street. “You could find things you could not find other places,” she said. “It’s not so punk rock anymore, but it’s still creative.”

The street has strong pedestrian traffic, with a large mix of people from around the Los Angeles area and tourists shopping vintage emporiums, designers’ ateliers and multi-line boutiques. A square foot of commercial space costs between $4.50 and $6, said Philip Klaparda, a partner in Dembo Realty. He said that Melrose is enjoying low vacancy and good business. “It’s as strong as it has been since the financial crisis of 2008 and even the early 1990s,” Klaparda said. 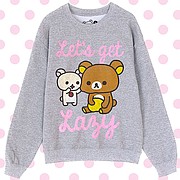 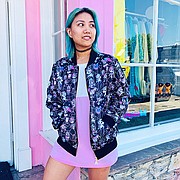 JapanLA opened on Melrose Avenue in 2006 to serve as the go-to place for Japanese cute culture including clothing and collectibles inspired by Japanese characters such as Hello Kitty by Sanrio.

JapanLA founder Jamie Rivadeneira seeks to forge relationships with Japanese brands in order to get exclusives for her 1,900-square-foot Melrose shop. Her plan has been working. JapanLA often hosts parties and branded pop-up shops for companies producing Japanese anime, such as Studio Ghibli, which has produced animated classics, such as “My Neighbor Totoro,” that enjoy a fervent fan base.

Selling clothing and collectibles produced by cute-culture brands is more than a business for Rivadeneira. Cute culture has been her main style obsession since childhood.

“I never grew out of it,” she said. She would take Hello Kitty pencils to work and was occasionally admonished by her managers, who thought it didn’t look professional, but she didn’t want to give up the cute culture.

“I thought I should go full into it,” she said. “I shouldn’t try to hide it.”

Initially, she opened a small JapanLA shop off of Melrose. Success came quickly, and she moved into her current Melrose space in 2010. In 2018, she opened a second permanent location in downtown Los Angeles’ Little Tokyo section. Since it’s a destination shop, JapanLA could probably work anywhere, Rivadeneira said, but it especially fits on Melrose.

“The vibe is creative and open-minded,” she said of the street.

Los Angeles–based Tokidoki’s Crystal Palace flight jacket has been selling well at the shop. It retails for $95. People like it because of the juxtaposition of dark and pastel colors, Rivadeneira said.

Also popular is Rilakkuma’s $45 Let’s Get Lazy gray sweatshirt. It features the Rilakkuma’s title character, a lazy bear. “It’s kind of like a boyfriend fit,” Rivadeneira said of the loose-fitting top. 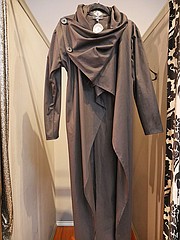 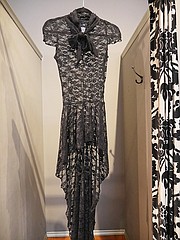 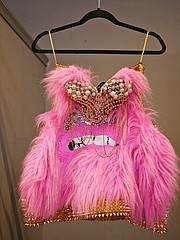 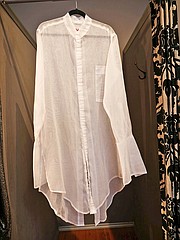 People shopping at the boutique are often stylists, performers, people going to the Burning Man festival and those wanting to make a statement. “It is outrageous, colorful, fun. You are pushing people to see you and what you are wearing. It is rebellious,” she said of the 1,800-square-foot shop’s styles.

Top-selling items are one-of-a-kind bustier dresses by George Styler. Covered in sequins and jewels, they retail for $4,700.

Merlin Castell is another popular designer, who makes a white shirt with long hems that drop around the knee and have a long slit up the back. The 100 percent linen shirt retails for $565.

The Nathalia Gaviria label makes the denim Clint coat, which is inspired by Clint Eastwood’s 1970s western films. They retail for $420. The coat, with a cowl neck, can be worn by men and women.

The shop also sells the Coqueta top, which retails for $139. The Nathalia Gaviria label introduced the Coqueta in 2015, and the lace top has been sold every season since then.

“It’s so versatile, it will never be out of style,” Gaviria said of the Coqueta. “You can wear it as a cocktail dress. It can be a bathing-suit dress. You can wear it over pants or shorts.” 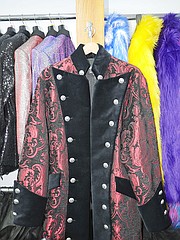 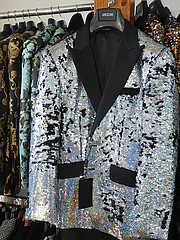 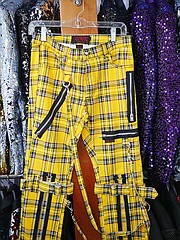 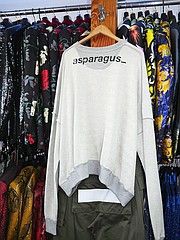 Since 2001, Michelle Hyon, a partner and buyer at the Typhoon boutique, has been running the 1,475-square-foot shop on Melrose and North Curson avenues. Before 2015, Typhoon focused on contemporary men’s merchandise. But competition from e-commerce shops was fierce, and Hyon decided to change the store’s merchandise focus. It would offer clothes that could only be found at Typhoon. A big market are stylists looking for unique clothes for performers to wear on stage or people looking for flamboyant styles for the Burning Man festival or a party.

Popular items at the shop include punk-style bondage pants produced by the label Tripp NYC, which retail for $109.99. “It’s the new trend for a lot of rappers and singers,” Hyon said.

Another popular look are coats and vests from the Shrine label, which seem to mix a 1967 Jimi Hendrix style with colorful 18th- and 19th-century military uniforms. One Shrine coat retailed for $549. Shoppers have also been picking up sequined tuxedo jackets from the Angelino label, which retail for $499.90. A sweatshirt from the Asparagus label sells well and retails for $149.

Melrose is celebrated as an eclectic street, but there are currently a few dominant styles represented, and they often make Wasteland a regular stop, said Troy Kelly, the company’s general buying manager. Around 90 percent of goods that it sells come from people selling their clothes to the shop. The rest come from other sources such as established vintage sellers and celebrity stylists.

Since Melrose neighbors Fairfax Avenue, considered a major hub of streetwear, kids wearing oversize hoodies are one of the street’s big style groups. Another style tribe is represented by the rocker kid who wears vintage concert T-shirts and jeans. There’s also the It Girl, who favors contemporary brands such as I.Am.Gia and For Love and Lemons.

Kelly called the 25-year-old Wasteland a place that focuses on designer retail, where people shop for designer and other high-end brands. One of the top-selling categories at the shop is outerwear such as bomber jackets, leather jackets and other coats produced by European fashion houses such as St. Laurent and Gucci. At Wasteland, these pieces can command prices above $1,500, he said.

Vintage concert tees sell well, with retail price points ranging from $38 to $500. Popular trending concert T-shirts range from those sold at shows where 1990s hip-hop heroes such as Tupac Shakur and Biggie Smalls performed. Also popular are shirts from classic rock bands from the 1970s. When popular public figures wear concert tees, there’s a spike in popularity. Kelly remembered Justin Bieber wearing a piece from Metallica in 2018, and there was a big demand at Wasteland for the band’s shirts.