“Part of the sales decline may be attributable to consumers making purchases in August ahead of tariff increases scheduled for September,” Perkins said in a research note.

However, the U.S. economy continues to be strong. On a year-over-year basis, U.S. retail sales for September 2019 climbed 4.1 percent. The U.S. unemployment rate was 3.5 percent in September. The unemployment rate dipped 0.2 percent from August 2019, according to theU.S. Department of Labor. 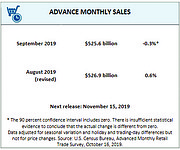 E-commerce sales climbed 12.9 percent over the same month in the previous year, according to the Commerce Dept. Perkins said that department stores saw a 6.1 percent year-over-year decline in retail sales in September.

“Department stores have been particularly hard hit by chronic mall-based traffic declines coupled with intense competition from off-price and discount chains,” he wrote.

The dip in September retail sales took place at the same time as a decline in consumer confidence, according to Lynne Franco, senior director of economic indicators at The Conference Board, a nonprofit research group that tracks the confidence of U.S. consumers.

“Consumer confidence declined in September following a moderate decrease in August,” Franco said. “Consumers were less positive in their assessment of current conditions, and their expectations regarding the short-term outlook also weakened. The escalation in trade and tariff tensions in late August appears to have rattled consumers. However, this pattern of uncertainty and volatility has persisted for much of the year so it appears confidence is plateauing.”