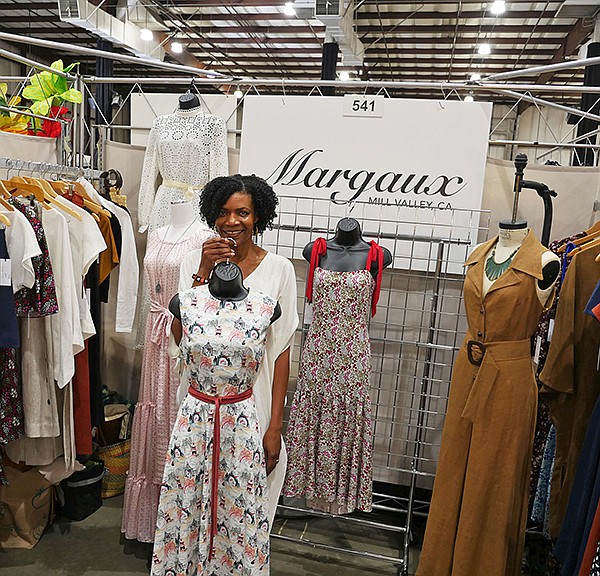 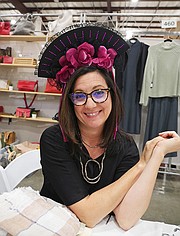 At the final Fashion Market Northern California trade show for 2019, retailers looked for Immediates, Spring 2020 fashions and, for Claire Samaras of the Angelique Boutique in Sonoma, Calif., styles with an edge for a certain demographic.

“We’re not youth oriented, but my store’s customers are youthful in thinking,” Samaras said of her 17-year-old boutique. She and Angelique store manager Laurel Shrier looked for new lines at FMNC during its Oct. 20–22 run at the San Mateo County Event Center in San Mateo, Calif.

“We’re looking for age appropriate with an edge,” Shrier said. “It’s not easy.”

Angelique was one of the boutiques that primarily serves a demographic that has been called modern contemporary or missy. This customer group has been a focus for FMNC. The trade show is a regional market that attracts independent boutiques primarily from Northern California and produces five shows annually.

Samaras and Shrier said that they ordered styles with animal prints. “It’s still trending,” Shrier said. “There are a lot of mustard and gold colors on the market.”

Kelly Cherian, buying director for the Orem, Utah, e-boutique Limelush, also said that animal prints are the sovereigns of the fashion jungle. “Animal prints are bigger than they have ever been,” said Cherian, who started her buying-director job in July. She was looking for chenille sweaters as well as feminine dresses with ruffles. “The color rust and earth tones have been great for this fall,” she said.

Margo Zatkovich of My New Arms

Kimberly Leo walked FMNC to look for styles that would suit the boutique business at her Namaste yoga studios in Oakland, Calif. High-waisted yoga leggings have been popular, she said. Her clients have also been buying matching yoga bottoms and tops instead of separates. She also looks to the wider market. “We still see so much fuzzy stuff, like faux-fur jackets,” she said. Accessories and basics for layering are also popular.

“It feels like a lot of ’60s and ’70s vintage is out there. There’s nothing that feels that new,” Bjorklund said of the fashion scene. “But frayed jeans seem to be going strong,” Risner said.

Around 193 exhibitors displayed goods ranging from tops, denim, footwear and scarves to jewelry and gifts at FMNC. The exhibitor count was about even with FMNC’s October 2018 show, said Mary Taft, the show’s executive director.

“It’s been busy,” said Nina Pérez of the Nina Pérez Showroom, which represents brands such as Flax, Niche, Coobies and Paper Label. She forecasted an uptick in sales compared to the October 2018 FMNC show. “This year has been up and down for stores,” she said. “But people are still planning for next year.”

Don Reichman of Reichman Associates said that the first day of the show was very busy and retail traffic was steady during the following days. At his booth, which represents brands such as Damee, Elana Kattan, Brand Bazar and Karissa & Me, Reichman noticed common shopping habits among buyers at the show.

“People shopped the brands they were already doing well with,” he said. “They are looking for new looks from lines that they have ordered from before.”

At his label’s 20-by-20-foot booth, John Kim of Mystree was fulfilling a new role during the October 2019 event after the brand’s long-term representatives Jerry and Judy Wexler retired in January 2019.

“We had our core Northern California customers come to the show,” Kim said. “Jerry and Judy told me that the retailers at these shows are loyal and local.”

Karen George of Karen George and Co. estimated that traffic was up because the weather during the show was warm and sunny and in the high 70s. During the October 2017 show, Northern California was hit by wildfires that caused around $14.5 billion in damage. In October 2018, the region was hit by another severe firestorm season that ended with the devastating Camp Fire, which decimated Paradise, Calif., in November.

“It feels better because we’re not coming off of horrific tragedies like fires,” George said. The tourism business in Northern California’s wine country has experienced a rally after setbacks from the fires, Samaras of the Angelique boutique said.

FMNC served as the trade-show debut for the dress line Margaux Mill Valley. Marcia George started the dress line in April. Made in Mill Valley, Calif., the line offers day-to-dinner dresses with wholesale price points ranging from $74 to $299, George said.

Another new vendor was My New Arms, headquartered in Windsor, Calif. The brand offers racer-back and bra tops connected to sleeves made out of spandex and nylon. This sleeve design helps shape women’s arms, said brand founder Margo Zatkovich.

“Women are excited to wear sleeveless-looking clothing again,” she said.

Another brand making its FMNC debut was Jeanie Clip, headquartered in Reno, Nev. The accessory brand makes a clip over the front button on the waist of jeans. Brand founder Jessica Patterson said that these waist buttons can damage and put holes in tees made out of light fabrics, which the clip prevents.

Also making its debut at the show was Los Angeles–headquartered Chris & Carol with young-contemporary looks that provide a missy fit, said Caroline Kim, a namesake of the label, which is designed by her mother. The brand’s styles are made in Los Angeles and are wholesale priced from $7 to $25.