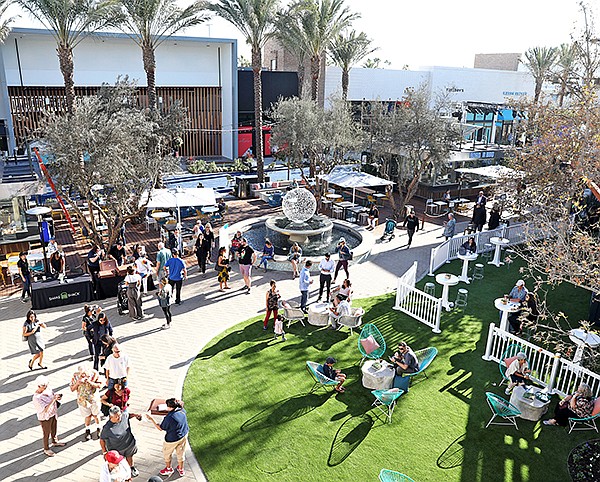 A new retail center has opened in Long Beach, Calif., as another mall is scheduled to wrap up the first phase of a $20 million remodel in Santa Barbara, Calif.

The Oct. 14 debut of the 2nd & PCH retail center in Long Beach and the Nov. 15 unveiling of a remodel of the main section of the Paseo Nuevo center in Santa Barbara, are two of a small group of mall-development hot spots in California, which was once one of the hubs of mall development in the world.

Large tracts of open land are a rare find in crowded coastal California, said Larry Kosmont, president of Kosmont Companies, a Los Angeles–headquartered real-estate and economic-development-services firm. Also, consumers’ shopping preferences have changed, and digital commerce has taken market share away from malls, Kosmont said. The shift has cut into the demand for malls.

But opportunity remains for retail centers, said Jean Paul Wardy, president of CenterCal LLC, the El Segundo, Calif.–based company that developed 2nd & PCH. CenterCal also developed The Veranda mall in Concord, Calif. It was one of the few new malls to open in California in 2018. Another one was Palisades Village, the Caruso mall in Los Angeles’ Pacific Palisades neighborhood.

Residents of well-to-do areas of Long Beach such as the Belmont Shores and Naples neighborhoods have to make long drives to shop at traditional malls such as Lakewood Center. Shopping for much of these affluent Long Beach neighborhoods is served by boutique districts such as 2nd Street in Belmont Shores or retail centers with supermarkets, big boxes and cinemas, such as the Marina Pacifica Mall and Marketplace Long Beach.

Wardy said that the absence of traditional malls in that area attracted CenterCal.

“There was a lot of data that showed the customer was there. But there were no stores serving these customers,” he said. “There was a long list of retailers that had never landed in Long Beach for one reason or another.”

Fortunately, some property was becoming available. Raymond Lin and his family were seeking to redevelop the Seaport Marina Hotel in Long Beach, which happens to be located by the corner of 2nd Street and Pacific Coast Highway.

For four years, CenterCal was in talks with Lin on bringing a retail center to the space. Negotiations were successful. In 2017, the hotel was demolished, and the 215,000-square-foot retail center was constructed in its place. Wardy declined to state how much money it cost to develop the center, but a 2017 Los Angeles Times story said it was $100 million.

Other fashion retailers include Johnny Was, Free People and a location for Linne’s, which is a Seal Beach, Calif., boutique. Surf brand Vissla is also scheduled to open a boutique, according to the retail center’s website.

Wardy said that 2nd & PCH is about 95 percent leased. He forecasted that the majority of the people going to the mall will be Long Beach residents. Other shoppers will be drawn from around the region. CenterCal is not taking customer traffic for granted.

Along with seeking out new retailers, 2nd & PCH will be producing events to draw in customers. “There will be movies in the park, concerts and art activities. We do a lot to create a place where customers can be with loved ones and enjoy themselves. We like to try a lot of things and see what resonates. There’s a lot of trial and error,” Wardy explained. “We’re being guided by what the customer wants.”

Owned by Pacific Retail Capital Partners, Paseo Nuevo will be completing the first phase of a $20 million remodel for a center that was introduced in 1990, said Mary Lynn Harms-Romo, Paseo Nuevo’s senior marketing manager.

A lot of the remodeling costs have paid for new brick pavers in the open-air mall as well as a new infrastructure for utilities such as cables that provide networking for the retail center in downtown Santa Barbara.

The remodel will also create common areas where shoppers can hang out. These lounges will feature a fire pit, outdoor seating as well as places to play games such as the traditional Italian bowling game of Bocce.

“Creating a nicer environment will attract better retailers,” Harms-Romo said. “Shopping centers are changing, and we’re trying to be ahead of the curve. It’s going to be more of a destination for multiple things, not just a shopping center.”

Paseo Nuevo is anchored by a Nordstrom. Other tenants include a Gap and a Pacific Sunwear. Much of the center has been leased, Harms-Romo said, because the center offers short-term leases. A couple of years ago, a puppet theater leased a storefront for 90 days. Santa Barbara–based Deckers Inc. also has produced pop-up shops at Paseo Nuevo.