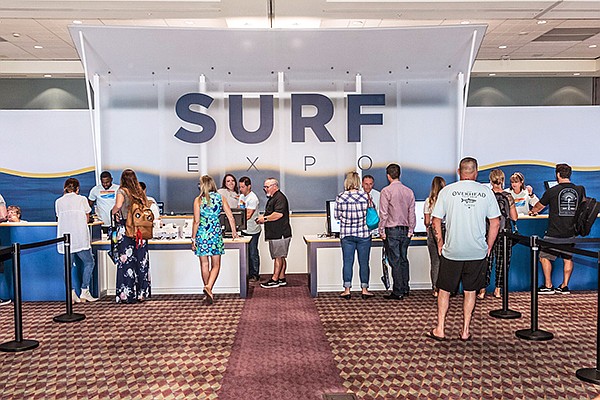 The Surf Expo water-sports and beach-lifestyle trade show that was scheduled for Sept. 5–7 at the Orange County Convention Center in Orlando, Fla., was canceled due to threats from Hurricane Dorian, which made landfall in the Bahamas on Sept. 1. In addition to the main Surf Expo show, event organizers at Emerald Expositions were scheduled to host the water-sports and beach-lifestyle marketplace Waterfest on Sept. 4, which was intended to kick off the main exposition.

Now in its 43rd year, this is not the first time that Surf Expo has been threatened by a hurricane or tropical storm. Most recently, the 2017 show was threatened by Hurricane Irma, which devastated parts of the Eastern Caribbean, including Puerto Rico.

“We wanted the minimal amount of inconvenience for our customers,” he said. “At the end of the day, it is purely about safety.”

At the time of the show’s cancellation, the storm registered as a category 5 hurricane, threatening to greatly affect Florida and the southeast region of the United States in addition to the entire eastern seaboard of the country. Airports in Orlando and other regions of Florida were closed.

The decision to cancel the show was made after examining all potential negative effects of hosting the show. A team of Surf Expo organizers considered the welfare of the entire team along with how road and airport closures could cause attendees, exhibitors and crew to be stranded in a dangerous area.

“You don’t want people getting on planes to come to an event to find out that it’s been canceled, so you’re trying to minimize any unnecessary travel,” Turner said. “There is this bigger group that comes in early, and you don’t ever want to put them in harm’s way or in a position where they have to stay during a storm because there wasn’t a cancellation in time.”

Remaining committed to his exhibitors and buyers, Turner mentioned that show fees were being reimbursed as he hoped to facilitate helping businesses coordinate with their sales representatives to return to selling.

“Refunds are already in the works to cover everyone as soon as possible so they can look at utilizing those funds to put their sales teams on the road and connect with the customers that they missed at Surf Expo,” he said.

Longtime Surf Expo exhibitor Dale Rhodes, vice president of sales of Katin USA, headquartered in Rancho Dominguez, Calif., confirmed that his company’s travel expenses were returned over the last few days. He was impressed by the accessibility of the trade-show team, particularly Rod Tomlinson, the company’s category manager for surf and skate, and its efforts to keep exhibitors informed.

“We got all the cancellations for our air and our lodging reimbursed, and we’ll be reimbursed for the show as well, so it was very professional of them. These guys are a class act,” he said. “We were so appreciative of their transparency with us. They kept in close contact with every single manufacturer. It takes a lot of time, but they kept us up to date.”

Noting that Surf Expo affords accessibility to East Coast retailers, Rhodes confirmed that he will be working with his reps to compensate for meetings that would have been held during the event. While business is important, he agreed with Turner that safety was a priority above all else.

“I have reps in Florida and the mid-Atlantic. They were shoring up their homes, so they weren’t worrying about the show. My priorities are my reps and their families and the other families that live in the other impacted areas. At the end of the day, I wasn’t upset that the show was canceled,” he explained. “We have great reps, and now they will get back out on the road.”

With a tight-knit community that has supported the Surf Expo brand through a reciprocal relationship of transparency and respect, Turner is looking toward the future after having to bypass the September edition. After facilitating connections between his exhibitors and buyers through different methods, he will focus on the next edition of Surf Expo, which will be held Jan. 8–10 in Orlando.

“We are well on the way to being sold out in January. We are hoping to reach our audience that way,” he said. “We will use our connections between our buyers and sellers through our online means over the course of the next few weeks to try and make other connections whether through catalogs, social media and podcasts, or any method to facilitate that commerce that was missed.”

Additionally, Turner asked that those who are safe from the storm consider helping others who live in areas affected by the hurricane and were not as fortunate.

“If people could consider making a donation to the people in the Bahamas, it would be awesome,” he said. “Growing up in a coastal community, I understand. Even the cost of a latte would go a long way right now.”