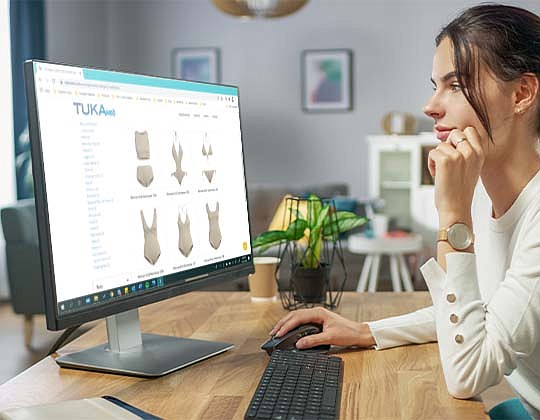 Tukatech announced services to create 3D gar­ments on demand, which will include help for virtual clothing design from Tukatech staff. | Photo courtesy of Tukatech

The Los Angeles–headquartered fashion-technology company Tukatech has been rolling out services that help designers create garments virtually on a 3D platform. On Dec. 15, Tukatech announced that its TUKAcenter locations and its web-services portal, TUKAweb, will offer services to create 3D garments on demand, with Tukatech staff helping designers create clothes virtually.

“With the growing popularity and increased demand of 3D for visualization, virtual fitting and sampling, apparel businesses around the globe are including this solution as part of their 2021 plans. However, many have been affected by declines in revenue due to the pandemic, and those that are looking to buy a 3D solution are not investing due to costs,” Walia said.

Tukatech has been busy. The company has continued to roll out products such as the signature TUKAcad software for CAD patternmaking, grading and marker making. Tukatech has worked with prominent companies and brands such as Guess, ABS-Warnaco, Tadashi and Stüssy. Also this year, Tukatech introduced the latest version of its TUKA3D Designer Edition, which provides designers with templates for computer-animated garments. Tukatech also introduced the TUKA APM, an automatic patternmaking add-on to its TUKAcad software.

Tukatech runs 62 TUKAcenters around the globe. Jagdish Chawla, founder of the Design Wolf Studio and the Bengaluru TUKAcenter, which was opened in Bengaluru, India, in 2019, said, “Since the opening of our TUKAcenter, we have had a lot of requests to create 3D garments and do virtual sampling,” Chawla said. “These are wonderful collaborations as our team has the 3D system and the know-how, and the customers come up with exciting new concepts.”