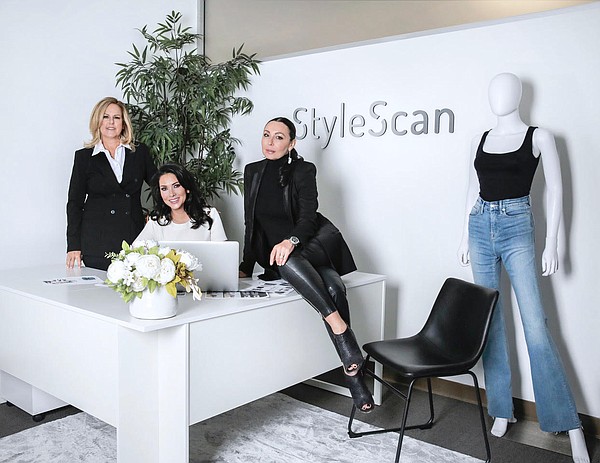 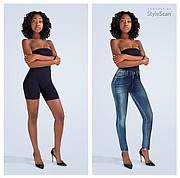 One StyleScan image of a model can be used to showcase a myriad of clothing styles. Image: StyleScan

After two years in development, the Los Angeles–headquartered fashion-technology startup StyleScan will officially emerge from stealth mode and make a debut in the business-to-business market, said Larissa Posner, the company’s founder.

StyleScan has started a round of pre–Series A funding, Posner said. Upcoming funding will help support the growth of her company, which is based on StyleScan’s proprietary technology. It uses machine learning to create what Posner called a visualization AI service. “The plan is nothing less than the disruption of catalog photography,” Posner said.

To start working with StyleScan, a brand takes photos of its models and sends them to StyleScan. StyleScan then uses its algorithms to dress the models.

“We call it ‘augmented apparel try-on.’ We can infinitely dress them [the models] in any outfits we have digitized,” Posner said of StyleScan. “Displayed in 3D, the garments can be shown on a carousel of diverse models. Best of all, the models need to be shot only once and the fashions are rendered, not photographed. Everything becomes much more flexible.”

One of StyleScan’s points of difference is image quality, Posner said. “Other companies use Adobe Photoshop to dress models, and their models wind up looking like paper dolls. We, on the other hand, use our technology to convey human forms, different rotations and a variety of poses. Our final image is indistinguishable from a traditional photograph.”

Posner and her colleagues recently coined another name for their proprietary technology—VAL, or visualization algorithm. “VAL can dress you. VAL can style you. VAL can appropriately render a clothing sample on anyone, whether it’s a model or an influencer or eventually a consumer,” Posner said.

Part of this service will offer brands the capability to run 3D product previews on their e-commerce websites. In the future, StyleScan plans to roll out video to accompany the 3D images.

StyleScan’s offices are located in the Avenue Six Studios, a production house in Los Angeles’ Van Nuys neighborhood. The company is staffed by mathematicians and engineers who worked on Wall Street and in Silicon Valley, in addition to fashion experts.

In mid-2021, StyleScan will roll out a consumer servicethrough which consumers will be able to upload a photograph of themselves into a brand’s platform that makes use of StyleScan technology. With the technology, consumers will get an accurate view of what they would look like in a brand’s clothing. StyleScan is currently testing the consumer program with fashion influencers who post photographs of themselves in clothing from a variety of brands on social media.

Posner worked as a fashion model in New York during her late teens and early 20s. She later worked as a registered investment adviser for hedge funds in Los Angeles and New York. She maintains residences in both areas.

When working in Manhattan in 2018, she rarely had time to shop for clothes despite every major brand maintaining a retail presence in the city. She also grew frustrated with e-commerce shopping and the guesswork it took to figure out how a garment would look on her.

“I put my investment adviser hat on,” Posner said. “I approached my stock market gurus and I said, ‘You use all of this technology to predict stock prices, and it gets better every day. Is there a way to deploy some of these techniques so I could see a garment in 3D? I’d also like to see it on diverse models and potentially see it on me.’”

Her technology colleagues thought it was an interesting premise. They started working on it with computer-visualization gurus after Posner funded a round of research and development. She became so invested in the possibilities that she earned a certificate in machine learning from the Massachusetts Institute of Technology in 2019. Posner also sought and gained support from angel investors. The venture met with further approval when it was named as a finalist in early 2020 for The New York Fashion Tech Lab business-development platform to support women-led companies.

Recently, StyleScan has been adding staff. In early December, Spencer Moore, a senior design director for the John Varvatos brand, officially joined the company as a partner. He will be handling StyleScan’s creative direction and act as a liaison between StyleScan’s technology team and the fashion business.

StyleScan’s chief marketing officer is Galina Sobolev, founder of the Los Angeles–headquartered contemporary line Single, which Sobolev continues to helm. Posner once attended a runway show for Single and later became an avid fan of the brand. Sobolev said she had been frustrated by software marketed to fashion businesses that had no sense of what fashion workers wanted.

“It’s not just a group of techies,” Sobolev said. “Nor are we a bunch of stylists who know nothing about true fit or true garment construction or how a garment should look on a consumer. Rather, we are seasoned fashion professionals, and with the aid of high-tech innovators we are bringing a lot to the game.