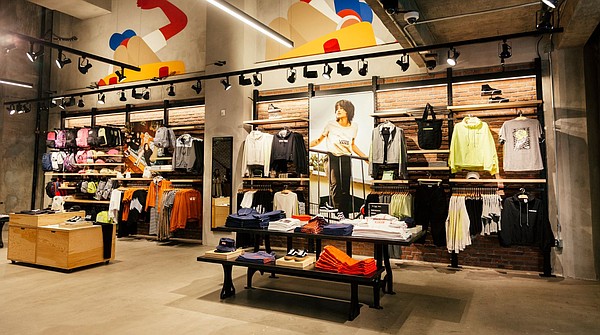 The cradle of the sport and lifestyle of skateboarding is located in Los Angeles’ Venice section, Santa Monica, Calif., and parts of Orange County, Calif. But Vans, the Costa Mesa, Calif.–based brand credited for making the first skateboarding shoe, chose downtown Los Angeles’ fashion district as the location for its new flagship concept store. The neighborhood is best known as a hub of showroom buildings, factories, the Santee Alley district of bargain fashions, as well as new streets of burgeoning high-end retail.

The 11,500-square-foot, two-story Vans flagship opened Feb. 5 and is located at 808 S. Broadway, adjacent to the historic Tower Theatre building, where Apple is currently constructing a sprawling flagship. Urban Outfitters opened an emporium in December 2013 in another neighboring building. Paul Smith, a prominent British brand, also is scheduled to open a boutique a few storefronts down from the Vans flagship.

Downtown Los Angeles is currently on track to become a bigger hub for tourists. Sports fans regularly visit the district for L.A. Lakers and L.A. Kings games. London-headquartered The Hoxton hotel brand opened a 174-room property in downtown Los Angeles in August. The 148-room Proper Hotel is scheduled to open in March. Carly Gomez, vice president of marketing for Vans’ Americas division, hoped the new shop would attract people from around Southern California.

“Our hope is that people will see this as a landmark space,” she said. “If you live on the Westside or the Valley, we hope that you will come here and experience something different that you couldn’t experience at other Los Angeles Vans stores.”

The shop also intends to plant downtown Los Angeles roots. Store art features photography from skate spots in downtown Los Angeles and nearby neighborhoods. Downtown Los Angeles gallery and publisher These Days was tapped to curate a book-and-printed-materials section at the flagship skate shop. Vans’ staff also consulted the Los Angeles’ mayor’s office, as well as city councilmembers, on other ways the shop can support the district.

Working with the nonprofits Chrysalis and Goodwill Industries, the shop hired formerly homeless and at-risk youth to become part of its staff. Gomez declined to say how many of these youth were employed but mentioned it was a significant number. Kim Matsoukas, Vans’ senior manager for sustainability, said that working with the partnerships was important to the store’s mission. “It was important to know the challenges and understand the needs here and how we can give back in a way that is authentic to who we are,” she said.

The shop is defined as a community-driven retail and events space. Vans runs five other flagships across America and the globe, which were built to showcase community events and the arts. The brand’s House of Vans pop-up shops also have run similar community and arts programming. But the downtown Los Angeles shop will embrace programming that will emphasize its surrounding neighborhood.

The second floor of the flagship devotes space to the 808 Studio, which will be a venue for community arts and music groups. A programming schedule has not been confirmed. It also may serve as a stage for seminars and talks, Gomez said.

The flagship’s second floor also houses a skate shop, offering space to Los Angeles–area skate brands such as Alva and Girl, which sell skate decks as well as the Vans Pro Skate line.

Downtown Los Angeles architecture firm Omgivning worked with the Vans team to design the space’s core, shell and storefront. The shops are designed to comply with LEED sustainability guidelines, though some Vans stores do not have LEED status, Matsoukas said. A Vans store in Charleston, S.C., was certified platinum LEED.

When a visitor walks into the downtown Los Angeles store, the right side of the shop is devoted to women’s apparel, with the left side carrying men’s pieces. Walls on the left side also feature pop-art skateboarding murals by Geoff McFetridge.

The back of the store is devoted to the store’s footwear section. There’s also a station where customers can customize sneakers. When the store opened, there was a display of customized shoes that took inspiration from the art deco–style Eastern Building across the street from the shop. The station also features photographs of downtown Los Angeles scenes. Gomez said that consumers are encouraged to customize shoes that are guided by their idiosyncratic imaginations.