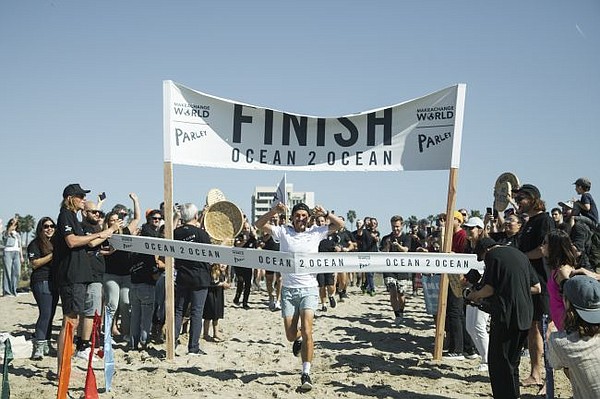 Parley For The Oceans & Fashion Make A Run Against Plastics

German designer Cyrill Gutsch made it his job to turn plastics into a fashion fabric. He also has recruited some of the world's prominent brands for a campaign against plastics pollution in the world's oceans. By 2050, there might be more plastic in the oceans than fish, according to an alarming report by World Economic Forum and Ellen MacArthur Foundation.

His campaign to save the oceans starts with a fabric called Ocean Plastics. Gutsch’s organization, Parley for the Oceans, created a range of premium materials for sports, fashion, luxury categories made from upcycled plastic debris, which are harvested from the ocean. Parley has partnered with brands such as Adidas, G-Star and Stella McCartney to make clothes and footwear out of Ocean Plastics.

The fashion industry has given Gutsch honors for his activism. Surf Industry Manufacturers Association presented him with its Environmentalist of the Year award in 2017. He got special recognition by the British Fashion Council in 2018.

A recent stop for Parley's campaign was Southern California. Members of the Parley team were in Santa Monica, Calif. on Feb. 1 to welcome runner Sam Bencheghib’s finish of the New York to California Ocean2Ocean run. Bencheghib made the continent-wide run to raise awareness about the ocean plastics crisis. Parley helped sponsor the run. Ocean2Ocean is a project by Make A Change World, a media non-profit co-founded by Bencheghib. Adidas also helped to support the run.

Fashion people, runners and activists celebrated with beach clean-up and a talk by champion big wave surfer Greg Long on Ocean activism. Long was honored with SIMA’s Waterman of the Year award in 2011.

Gutsch made a statement on the event and said Bencheghib’s run was like an activist campaign. “Completing this very personal challenge is an inspiration and encouragement to never give up, until your vision becomes a reality. Sam is an Ocean Legend in the making, a champion of the environmental movement. And I am grateful to count him as part of the Parley family,” Gutsch said.