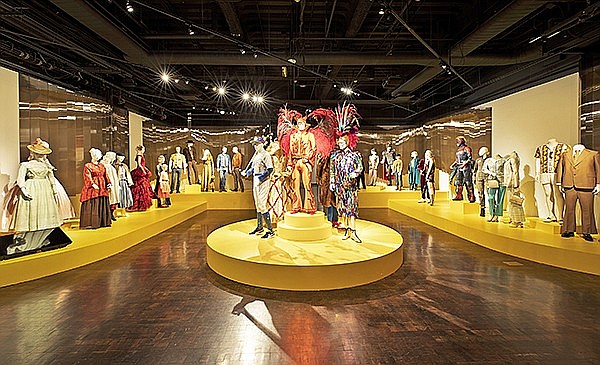 Now in its 28th year, the annual preview of the “Art of Motion Picture Costume Design” at the Fashion Institute of Design & Merchandising’s FIDM Museum & Galleries honored the work of designers from 30 films. Showcasing more than 100 costumes, the event, held Feb. 1 in downtown Los Angeles, included work from the five Academy Award nominees for costume design in addition to last year’s winner, Ruth E. Carter. Honored for her work on the movie “Black Panther,” Carter’s Oscar victory last year was the first win for best costume design by an African-American artist.

In 2019, Carter’s work hit the big screen again in the Eddie Murphy film “Dolemite Is My Name,” which allowed the costume designer to delve back into her memories of fashion of the era in which the movie is set as she developed the film’s wardrobe at the Eastern Costume Company in North Hollywood. While she is aware that the company is well known for its selection of 1970s pieces, she explained that each designer’s vision is the element that distinguishes the wardrobe of each film from the next.

“It’s your memory of something, your artistry, your mental picture that you’re able to connect to when you’re in the stock. Maybe five friends have been in there pulling for the ’70s, but you’re going to pull differently than everybody else. I instructed my crew that everything has to be authentic. It has to feel everyday, you cannot do a cliché of the ’70s, and it worked.”

In addition to seeing Carter’s work from “Dolemite Is My Name,” guests who attended the preview were treated to a showcase celebrating her work from “Black Panther” and an exhibit displaying her Academy Award.

Among the costumes on display from the five 2020 Academy Award nominees for costume design were: “The Irishman” by Sandy Powell and Christopher Peterson, “Jojo Rabbit” by Mayes C. Rubeo, “Joker” by Mark Bridges, “Little Women” by Jacqueline Durran and “Once Upon a Time…in Hollywood” by Arianne Phillips.

“Anyone who has not been to this exhibition, it’s the chance of a lifetime,” Costume Designers Guild President Salvador Perez said. “You will not get to see this type of clothing—this category of clothes—in one room ever again.”

Included in the exhibit were costumes from other films including “1917,” “A Beautiful Day in the Neighborhood,” “Avengers Endgame,” “Ford v. Ferrari,” “Harriet: Be Free or Die,” “Maleficent: Mistress of Evil,” “Missing Link,” “Rocketman” and “Star Wars: The Rise of Skywalker.”

The FIDM Museum & Galleries’ “Art of Motion Picture Costume Design” was unveiled to the public Feb. 4 and will remain open through March 21 with complimentary admission.