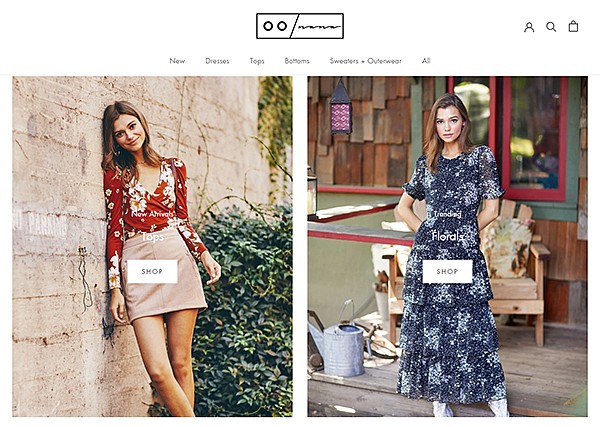 Amazon.com has made billions of dollars in revenue by offering a direct-to-consumer marketplace for vendors and manufacturers.

Los Angeles entrepreneurs Yul Kwon and Michael Kim recently introduced the e-marketplace Oonana.com. It will create a direct-to-consumer site for a group of manufacturers who have been pressured in the past year by bankruptcies of retailers such as Forever 21 and Charlotte Russe as well as a market made volatile by recent trade wars.

“The Trump administration’s tariffs are not helping, and retailers are not passing extra costs from the tariffs onto consumers,” Kwon said. “The state of fashion now is that manufacturers have to pay for most of these things. We want to give smaller businesses an alternative.”

Located around the San Pedro Mart in downtown Los Angeles’ fashion district, Oonana plans on delivering the same market and demographic that many retailers gave to the young-contemporary and fast-fashion vendors who make clothes for women ages 18 to 44. But Kwon and his team of four staffers promise that they can give manufacturers a higher margin than retailers because there is no proverbial middleman. About 20 vendors actively work on the site, which officially launched in July, Kwon said. He was scheduled to travel to the MAGIC trade show Feb. 5–7 in Las Vegas, to recruit more vendors.

Kwon also serves on the board of the Korean-American Apparel Manufacturers Association as well as the L.A. Fashion District Business Improvement District. He formerly consulted with the wholesale e-marketplace Fashion Domino. But Oonana is a completely different venture and different market from the former venture, he said.

He gained inspiration for Oonana by listening to colleagues describing an increasingly tougher market for wholesalers, he said. He also remembered staff from the Fashion District BID fielding a steady flow of calls from the public looking for places to shop and manufacturers selling clothes in the fashion district.

However, most of the consumers and fashion district manufacturers were not connecting, Kwon said. “This is crazy, we have the product but we’re all at the mercy of retailers. Why can’t we join together and skip the retailer?” he asked. “It was always a dream of mine to do that.”

Joseph Yi, owner of the Los Angeles fashion brand Jolie said that Oonana represents something new for his sector. “It’s so hard for this industry,” he said. “You have to be creative and take some risks. You can’t rely on the old ways of doing things.”

There are no membership fees for Oonana. The platform has requested a 14 percent fee on sales to help maintain Oonana. The fees will also help support the company’s shipping and marketing. Instead of requiring vendors to make their own shipments, Oonana ships vendors’ goods from a shipping partner in downtown Los Angeles’ fashion district.

Like other e-marketplaces, vendors upload pictures of goods and other marketing materials. Oonana also will develop social-media campaigns where micro-influencers show off vendors’ goods on their social-media profiles. Eventually, Kwon hopes to boost the platform’s revenues by selling banner ads and producing occasional pop-up shops.

As Oonana gains momentum, Kwon hopes his company will serve as a central sales channel for vendors.

“There always will be multi-brand retailers who make money,” she said. “Conversion rates for many e-tailers are less than 2 percent. You should take the $50,000 you spend on Facebook ads and spend them on two storefronts.”

If vendors do business on e-marketplaces such as Oonana, vendors will save money that they often give in commissions to middlemen.

“They can take risks on better styles. They can reach their price points and take on extra embellishment and stitching. The manufacturer and the consumer wins,” Kwon said. “They get better product for the same or lower prices from a retailer.”