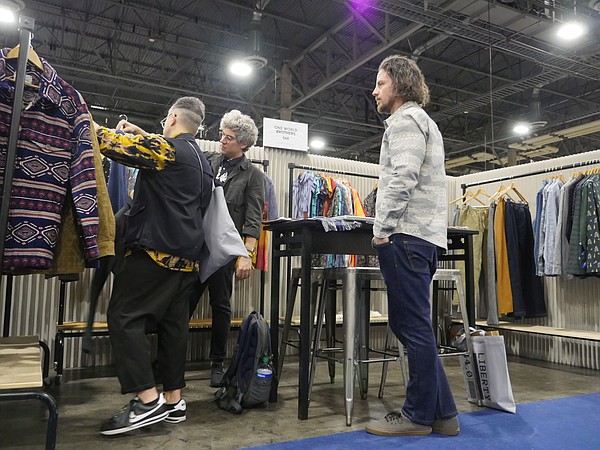 Liberty Works With New Schedule and Other Changes

The 14th season of the Liberty Fairs trade show was shaped by change when it ran Feb. 4–6 at the Sands Expo Convention Center in Las Vegas.

The recent show marked one of the only times that the contemporary dual-gender trade show ran solo as its sibling show, Agenda, was on hiatus. The February Liberty show also worked on a different schedule. It started a day before the MAGIC trade show, which ran Feb. 5–7.

Many Liberty vendors said that the show enjoyed a major surge of buyer traffic on Feb. 6, the last day of the show. Alfred Davis, a co-founder of the T&A Showroom, said that the traffic pattern was a surprise. “My history of trade shows said that it’s horrible on the last day. But this day was packed,” he said.

His sprawling 2,500-square-foot section of Liberty exhibited brands such as a resurgent Ed Hardy, which experienced a plummet in popularity shortly after the Great Recession. T&A exhibited a preview of the once wildly popular brand at Liberty in August 2019. For the most recent show, it exhibited a wider selection of the tattoo-inspired Ed Hardy along with a stable of other brands including Le Cruz, Oren Kash and Oublier Collective.

Vendors also produced big activations such as a coffee lounge put together by Calik Denim, a custom-T-shirt station produced by Jack & Jones and Re/Up screen-printing its sustainable T-shirts.There also was a vintage cash-and-carry section.

Retailers browsing the trade show looked to parse trends. “There was a lot of discussion about vintage clothing,” said Mark Werts, founder of American Rag, an influential Los Angeles retailer.

Jisook Lee of the Los Angeles–based boutique Black Market said that designers have been working with a wider palette of colors. “There are a lot of bright colors and neons,” she said.

Ray Goodman, founder of the Trash and Vaudeville boutique in New York City, shopped the show. The boutique was influential in shaping punk-rock style and enjoyed the patronage of the stars of the first wave of New York punk rockers in the late 1970s. Goodman said that he had placed orders for Schott leather jackets, Kennington Ltd. collared shirts and Kangol hats, while mentioning that bondage-style pants were trending.

Attendance of buyers and vendors was about even with the February 2019 show, said Ronny Oppong, a Liberty sales manager. About 325 brands participated in the February 2020 show and a bit under 3,000 attendees walked the show.

He forecasted that Liberty’s August 2020 show will bring more change, but he didn’t detail what changes would come. “We’re going to be bringing a new experience to the Las Vegas show,” he said. “There will be a bigger emphasis on lifestyle as well as a platform for brands to express their stories,” he said.