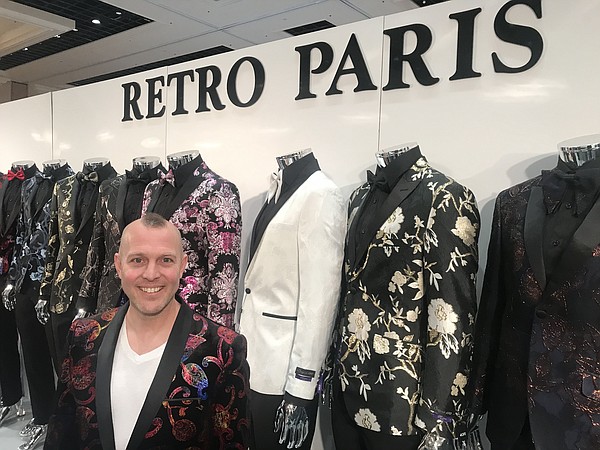 “If you walk the floor, every trend is captured,” she said. “But it is a value-driven proposition.”

Suiting, jeans, socks, boardshorts and footwear labels were among the brands exhibiting at the show. Tim Tam, owner of the Carrucci footwear brand, had been exhibiting at MAGIC Mens for more than a decade. He said that the recent show was good. “We picked up 20 new customers,” Tam said on the final day of the show.

Montee Holland, founder of the Tayion Collection, was one of the anchor brands at the show. He produced a 14-look fashion show at his 10x20 booth on Feb. 6. He said that his schedule was busy on top of the work that went into producing a fashion show. He and his staff took in more than 90 meetings, which included retailers such as SuitMart, headquartered in Houston, and Portabella in New York City. He exhibited Summer and Fall 2020 looks for his collection, which retails for $110 to $185, as well as the diffusion brand T-Fusion, which features polyester suits that wholesale for $70 to $85.

Much of the show’s real estate focused on suiting. Los Angeles–headquartered Retro Paris exhibited tuxedos. Owner Rob Dupetit said that prom season was a big deal for his label. Tux colors were important. “They want to match the suit to the girls’ dresses,” he said of the prom goers his brand outfits. Popular colors included metallic reds, royal blues and pinks. “It’s got to have a pop,“ he said. “It’s got to be unique.”

Kimberly Breed was buying suiting and other men’s styles for her upcoming e-tail shop Sirrealmens.com. She said that a minimalist style was not currently at the leading edge of fashion. “Guys are getting into bling-y prints, patterns and colors. It’s bold. There are a lot of flowers and paisleys,” she said.

The Hawaiian Island Creations brand introduced new prints on its eight-way octo-performance stretch boardshorts. One of the designs featured tattoo designs representing different Polynesian groups, said Baltazar Magdirila, HIC’s design director. He said that the show enjoyed good walk-in traffic. “We got a bunch of people coming at the same time,” he said. “It was a good problem to have.”