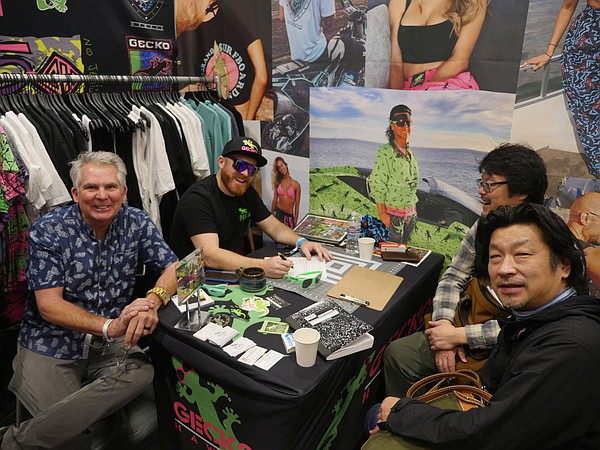 Pooltradeshow was conceived as a forum for emerging and art-inspired brands, but Derek Sciacqua of the Gecko Hawaii brand also considered the trade show, which ran Feb. 5–7 at the Mandalay Bay Convention Center, as a platform to make trade-show debuts.

He made the trade-show debut of the line Gecko x Riff Raff, which features caps, bandanas and T-shirts bearing glow-in-the-dark inks. Riff Raff, a rapper, has worn the collaboration line during his concerts. Gecko x Riff Raff was exhibited with the brand’s wider collection of goods, which features neon colors and graphics of geckos, Sciacqua said. “We saw some great retailers from across the world who are serious about buying quality products,” he said.

Also making a trade-show debut was Brooklyn, N.Y.–headquartered Conscious Step. The company designs socks inspired by activism. The brand donates proceeds of its sales to environmentalist nonprofits as well as those helping people living with HIV, said Zain ul Arifeen, Conscious Step’s director of sales and marketing. He said that the show was a good platform for new brands. “We’re getting our name out there,” he said.

Pool also was a forum to make a statement. Exhibiting at the show was San Francisco retailer Knobs, which makes a line of clothing inspired by gay-pride weeks, said Samuel Rodriquez, a Knobs buyer. Pool also featured activations such as a pop-up tattoo parlor, produced by Las Vegas’ Club Tattoo, where people could get permanent tattoos inked for free.

Another retailer shopping Pool was Cecily Diffin, co-owner of The Ruddy Duck Mercantile, located in Hood River, Ore. She said that she noticed apparel companies using better quality fabrics in the past few years. “Wide-leg crop pants are also on trend,” she said.