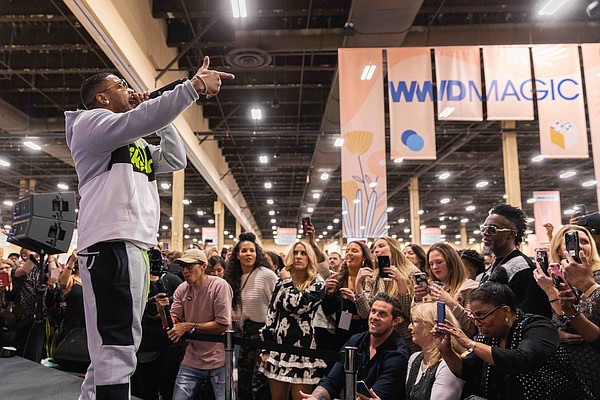 The influencer appearances and concerts made the case that sizzle and fun are important factors attracting people to trade shows. WWDMAGIC vendors also got in the game.

The wholesale online marketplace FashionGo produced raffles on the first two days of the show. During the last hour of the show, it opened a cash-and-carry section at its 30x100-foot On:line by FashionGo booth. The raffles and the cash-and-carry helped drive traffic to the booth during an already crowded market, said Alin Kim, a FashionGo marketing associate. “It was very busy— overwhelming sometimes—but all in good ways,” Kim said. Buyer traffic came in waves. “Mornings were light. Mid-mornings were heavy. Lunch was light. After lunch, boom!” she said.

Trade shows are all about location, location, location. The booth for the La Forme’ Jeans label was placed in a section populated by athleisure and yogawear brands, said Rick Guido, co-founder and partner of the Los Angeles–based brand. “It was a good thing. We were getting the Alo and Lululemon customer. Our ‘jegging’ legging jeans seemed to have worked with people who were looking for oversized tops," he said. "They needed a denim-looking legging to put under tops.”

Mike Chodler, the founder of Project Social T, said that independent boutiques made up a significant part of his booth’s business. “That’s encouraging news for 2020. The boutique stores are certainly thriving in a very challenging retail marketplace,” he said.

Buyers and consultants walking the show saw a wide-ranging array of styles. Rebecca Appl, a buyer for the Carousel Emporium in Sandpoint, Idaho, said corduroy was trending.

Patrick Anderson serves as vice president of buying, product development and site merchandising at the e-emporium Lulus.com, headquartered in Chico, Calif. He saw styles from almost every season at WWDMAGIC. “It’s Spring, Fall, Summer and Immediates,” he said of the show. “There were a lot of lavenders, turquoises and neutrals. There was a lot of volume in sleeves. For fabrications, there’s still a lot of play on hard and soft such as satins complementing denim."

With cuts and styles, he saw a few trends that will remain, while ecological options gained momentum.

“One-piece dressing is still important. Jumpsuits across multiple fabrications. A lot of people were playing up ‘wear now’ Fall silhouettes in Spring colors," he said. "A lot of booths were talking about sustainability.”