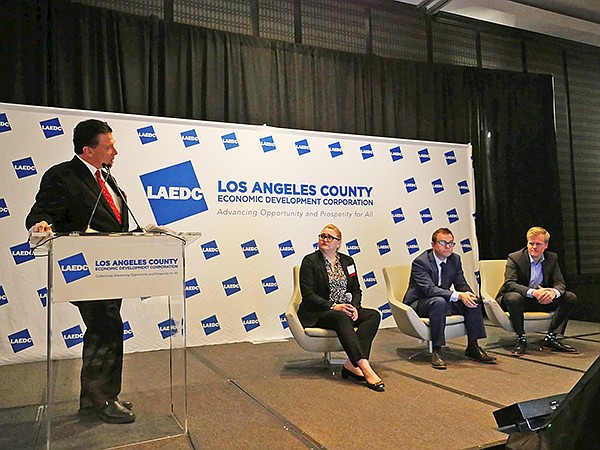 L.A. and California Economy Strong, But Might Take Small Hit from Coronavirus

California and Los Angeles County are forecasted to enjoy moderate yet sustained growth throughout the next two years, according to a Los Angeles County Economic Development Corporation forecast released on Feb. 19. Production slowdowns over the coronavirus outbreak, as well as entrenched issues such as housing and the cost of living in Los Angeles, are threatening growth.

Healthcare, tourism and entertainment are forecasted to be major growth industries for Southern California. But skyrocketing housing costs, as well as a tight housing market, put growth in danger. If fewer people can afford to live in California, there will be fewer people to participate in the economy.

Shannon Sedgwick, the director of LAEDC’s Institute for Applied Economics, quoted the Southern California Association of Governments Regional Housing Needs Assessment group, which said that 1.3 million new residences needed to be built over the next eight years to meet needs. It would require triple the current levels of housing production.

“We think it will be like SARS in 2002–2003,” he said. “Within three months, they’ll start containing the spread and start managing it quickly.”

Businesses that have been hurt include tourism, as there will be 300,000 fewer Chinese visitors to Los Angeles. Luxury boutiques, which sell goods to these tourists, are forecasted to take a hit.

Panic over the coronavirus outbreak has caused the cancellation of at least two apparel trade shows and for major companies such as Apple, which has lowered its earnings forecast for the second quarter of its 2020 fiscal year.

Media reports contend that Chinese factories are ramping up and getting back to work, but fashion-business analysts seem to be divided on what happens next in this crisis. Will it permanently change how fashion does business, or will familiar supply chains bounce back?

Chinese manufacturers and supply chains have taken the biggest hit. Major cities in the Hubei province have been quarantined.

Workers have not been able to travel to factories. Truck drivers have not been able to transport goods. The trucking slowdown in China has become the major choking point. It has been stopping the transportation of goods to airports and seaports, Robert Krieger, president of Krieger Worldwide,an international freight forwarder, said. The coronavirus outbreak is the only time during his more than 30 years of working in China where he has witnessed this much of a slowdown. “I was in China during the avian flu, SARS and the [2008 milk scandal]; this is the first time the total supply chain has been disrupted,” he said.

Apparel businesses will have to move quickly to replenish inventories. They might choose to manufacture goods in Mexico or countries in the Central American Free Trade Agreement,said Mercedes Gonzalez, director of Global Purchasing Companies, who frequently travels to Latin America.

“People have been sitting on the fence about going there [China],” Gonzalez said about apparel businesses. “But now, what are their alternatives? It’s better than an empty store.”

There are possibilities that Los Angeles and American manufacturers could receive a boost from companies looking for new factories. Daniel Antonio, founder of the Los Angeles–headquartered Dirtymilk label, had taken his manufacturing to Los Angeles after a few years of making it in China.

“We’re not going back to China. We were victims of the trade war,” he said of Dirtymilk. “Then, next thing you know, you have this outbreak. It’s affecting a lot of people.”

However, manufacturing in Los Angeles may not be for brands who need to keep their prices low. Antonio estimates that manufacturing footwear such as sandals in Los Angeles costs him 60 percent more than it does in China. However, he gains advantages by manufacturing domestically, being able to control production and not having to wait for shipping times to receive product.

“If they weren’t already here, they’re not coming here. They’re looking for other places overseas,” Antonio said. “Vietnam is a major factor right now. A lot of people are talking about Pakistan and Turkey.”

Jeff Van Sinderen, an equities analyst with B. Riley FBR, forecasted that the coronavirus outbreak will spike and then disappear like previous outbreaks of disease in China. “Usually, they tend to peak in February and ramp down in March. Then, we should be heading back to normal,” he said.

First-quarter earnings will be hurt by the outbreak, but there could be a rally after the outbreak is curbed. There could be pent-up demand for goods. “It’s still cold in much of the U.S.,” Van Sinderen said.

“We live in a buy-now, wear-now world, and spring merchandise sales are not likely to peak until the weather broadly warms up,” he said. “It would have been worse if this happened later in the year. Warmer weather would come and spring/summer goods would not be optimally stocked in stores.”