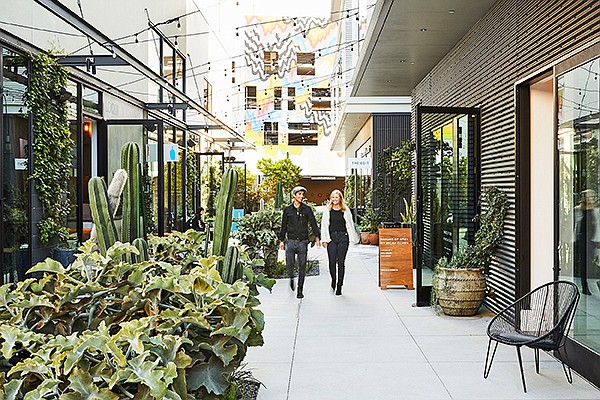 Runyon Group Continues to Build on Its Properties and Promise

After wrapping up its third year in business, the Platform boutique retail center in Culver City, Calif., is working on a $60-million expansion. The site will then house a new wing of creative offices, retail offerings and restaurants. Located adjacent to a Metro station, the center is a short drive away from the grounds of Sony Entertainment Studios.

The 70,000-square-foot expansion is scheduled to be completed in late summer 2020, David Fishbein, a Platform co-founder, said. Much of the expansion’s real estate will be devoted to creative-office space. Interactive gaming company Scopely has committed to leasing 60,000 square feet of Platform’s new wing. The remaining 10,000 square feet will contain two retail spaces, one of which will most likely house a fashion boutique.

The expansion comes at a time of change for the high-end type of boutique retail that Platform serves, which includes construction of new features at the 20-space retail center, said Fishbein, a partner at the Runyon Group, which developed and manages Platform. The company also handles leasing for Row DTLA, the campus of retail, restaurant and creative offices located in downtown Los Angeles.

In June, Fishbein and business partner Joseph Miller unveiled Platform Park, which was formerly a vacant lot owned by the Los Angeles County Metropolitan Transportation Authority. The Runyon Group redesigned the space into a park with granite pathways and benches made out of wood from fallen trees that otherwise would have ended up in a landfill. Platform Park’s green space has been used for community events and was named by public radio station KCRW as one of the “Best of 2019: Spaces and Places.”

In October, Fishbein and Miller opened The Optimist, a men’s fashion store devoted to new and emerging designer brands. They not only own the store but also actively work as buyers to find appropriate brands to sell at the store. They believe that this developer-operated retail-business model might serve as a blueprint for other shops in the center. Fishbein forecasted that, in the near future, he and Miller might own and run half of the stores in Platform Park.

For the duo, getting into the retail game also has roots in the challenges that fashion businesses are currently experiencing. 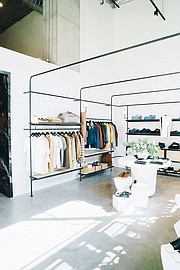 “It’s an unusual time globally for independent retail,” Fishbein said. “Fewer entrepreneurs are getting into the multi-label business. We used to have an easy time of finding up-and-coming retail concepts. We saw that if we wanted to have the best retail and stores, we’d have to get into the business ourselves.”

The Runyon partners found out that they not only love developing retail centers but also have an affinity for running shops, buying merchandise and developing store concepts, Fishbein said. He plans on traveling to Italy during Pitti Immagine Uomo fashion week in 2020 on a buying trip for Optimist.

The store claims U.S. exclusives on new and emerging men’s lines, such as Capsul and American Vintage, which are based in Paris; the New York City brand Kule; the Italian knitwear label Scaglione; and leather-accessories by Mr. Fox from Mexico City. Future plans for Optimist include honing the store’s focus, incubating new labels and potentially bringing the shop to new markets where opportunities are best for a new retail location, Fishbein said.

Fishbein and Miller started the Runyon Group in 2011 with a focus on boutique retail. Many of their colleagues skipped over working with new and emerging brands because a big payday was not guaranteed. But the operators of retail centers eventually began to see things the Runyon way. Over the past few years, more malls have shown interest in bringing emerging brands to their properties in an effort to differentiate themselves from the competition.

The Runyon Group became a consultant to apparel brands and to companies that develop, build and manage malls. The company currently serves as a leasing agent to Row DTLA, which is owned by the Los Angeles–based Atlas Capital.

Upon its launch, the site gained headlines for bringing the prominent streetwear store Bodega to downtown Los Angeles, but it also experienced a recent setback when the Tartine Bakery, a critically lauded San Francisco–headquartered restaurant, closed after 11 months. Tartine was considered an anchor at Row DTLA. Fishbein said that Row DTLA will embrace the opportunity to learn from Tartine’s departure.

“There’s always successes, and there are always failures,” he said. “Success also means continuing to learn from failures and successes that bring in tenancy and will grow tenancy in the long term. We have a nice roadmap that will bring in the right kind of community to bring in more food and beverage and retail that will grow Row DTLA as a destination for the long term.”